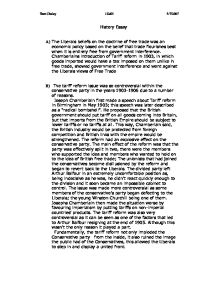 Chamberlains introduction of Tariff reform in 1903, in which goods imported would have a tax imposed on them unlike in free trade, showed government interference and went against the Liberals views of Free Trade

History Essay A) The Liberals beliefs on the doctrine of free trade was an economic policy based on the belief that trade flourishes best when it is entirely free from government interference. Chamberlains introduction of Tariff reform in 1903, in which goods imported would have a tax imposed on them unlike in free trade, showed government interference and went against the Liberals views of Free Trade B) The tariff reform issue was so controversial within the conservative party in the years 1903-1906 due to a number of reasons. Joseph Chamberlain first made a speech about Tariff reform in Birmingham in May 1903; this speech was later described as a "radical bombshell". He proposed that the British government should put tariff on all goods coming into Britain, but that imports from the British Empire should be subject to lower tariffs or no tariffs at all. This way, Chamberlain said, the British industry would be protected from foreign competition and British links with the empire would be strengthened. The reform had an explosive effect on the conservative party. ...read more.

The 1906 election was the first election where the voters didn't have a major distraction, before there had been such subjects as Home Rule and the Boer War. Home Rule had allowed the Conservatives to focus on getting their policy on Home Rule correct to swing voters their way. When the Boer War was occurring, the British public focused more on the foreign policies of the parties rather than Homeland policies. Therefore, when there was no major distraction people tended to focus on what the Government was planning in the way of reforms for them, the public; in the Conservatives case they didn't offer a lot. Where the Conservatives were failing the Liberals took advantage, although their social improvements were extremely vague, they did offer more than the conservatives. Lack of Social reform however weren't the only reason why the conservatives lost out to the Liberals in such a major way. Another major factor was the Education Act of 1902; this proved to be both Balfour's greatest political achievement and his worst. Arthur Balfour, against the wills of both Joseph Chamberlain and Lord Salisbury, pushed through a bill that proposed major changes to the Education service; school boards that had been set up in the 1980s were to be abolished in favour of LEA's. ...read more.

decades, this allowed the Liberals to take advantage and launch their own campaign of keeping free trade; this is why many people believed that Tariff reform issue was the most important factor in cementing the Liberals success. The Conservative party weren't helped by the fact that Balfour was a very indecisive leader, he was one of many Mps that "sat on the fence" when asked about his thoughts on Tariff Reform. The indecision of their own leader made many Mps also unsure about their position meaning many left and converted to the Liberal Party. Balfour and Tariff reform, and the impact it had on the Conservatives and their voters, was much like what Gladstone and the Home Rule bill had on the Liberals and their voters; both lost the Parties precious votes and allowed the other to take advantage at that time. The Tariff reform did have a major impact on the way people voted, especially in the working where many people thought that jobs may be lost and that other countries would stop importing goods form England regardless of whether or not they were in the empire. ?? ?? ?? ?? Tom Cheley 12MH 5/7/2007 ...read more.