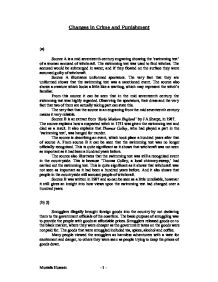 Changes in Crime and Punishment.

It was in Pentonville, London where the first of this type of prison was opened in 1842. It was able to accommodate five hundred inmates. Others followed, including Portland in 1849, Dartmoor in 1850, Portsmouth in 1852, Brixton in 1853 and Chatham in 1856. Between the years of 1842 and 1850, fifty prisons were built or rebuilt. Elizabeth Fry made a large contribution to prison reform. This is because she was the first to fight for what we now regard as first principles; classification of criminals, segregation of the sexes, female supervision of women and provision for education. The very fact that she spent twenty years checking every female convict ship before it sailed; inspected prisons and mental hospitals in Scotland and Ireland; instituted a Nursing Order; provided libraries for coastguard stations; and struggled for housing and employment for the poor, shows how determined she was to change the way in which prisons were run. It can be argued that the government's action in the first half of the nineteenth century was more important than Elizabeth Fry's contribution to prison reforms. This is because their actions resulted in several changes to prison reforms. Such as the building or rebuilding of fifty prisons between the years of 1842 and 1850. It can also be argued that Elizabeth Fry's efforts were more important as it was she and other reformers that demanded for better prisons that made the government start to act in the year 1815. It can be stated that without the continuous effort of Elizabeth Fry and other reformers the government may have never acted upon changing the prisons at all. Mustafa Hussein - 1 - ...read more.