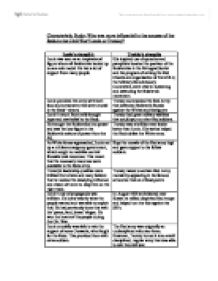 Characteristic Study: Who was more influential in the success of the Reds in the Civil War? Lenin or Trotsky?

Characteristic Study: Who was more influential in the success of the Reds in the Civil War? Lenin or Trotsky? Lenin's strength's Trotsky's strengths Lenin was seen as an inspirational figure whom all Bolsheviks looked up to as a role model. He had a lot of support from many people. His inspired use of speeches and pamphlets boosted the position of the Bolsheviks in the Petrograd Soviet and his program of arming the Red Guards and organisation of the M.R.C, the Military Revolutionary Committee, were vital in sustaining and defending the Bolshevik movement. Lenin provided the army with both food and armaments that were crucial in the Reds' victory. Trotsky commanded the Red Army that defended Bolshevik Russia against the Whites and foreigners Lenin's return from exile brought hope and new belief to the Reds. ...read more.

Trotsky raised uncertain Red Army morale by appearing in his famous armoured train at critical points Lenin's use of propaganda was brilliant. He knew exactly what the people wanted and was able to exploit this. He had previously done this with his 'peace, land, bread' slogan. He won the hearts of the people during the Civ. War. In August 1918 at Sviiashsk near Kazan he rallied dispirited Red troops and helped turn the tide against the SR's. Lenin crucially was able to win the support of some Cossacks, who fought for the Reds. This provided them with extra soldiers. The Red army was originally an undisciplined volunteer force. However, Trotsky turned it into a well disciplined, regular army that was able to win the civil war. ...read more.

Lenin, in contrast, was different from Trotsky. It is probably their difference in qualities that made them compliment each other. Lenin was arguably the better leader of the Bolsheviks. He knew what the people wanted and could exploit this fact to win the hearts of people and gain support for the Reds. Like I have written in the table (above), Trotsky was a magnificent leader, but was occasionally erratic in his decision-making. It was Lenin that acted as a steady influence to stop Trotsky making any uncharacteristic mistakes. Lenin was a figurehead for the Red army. His return from exile first lifted the Bolsheviks and inspired them to revolt and seize power from the Provisional government. As long as he was there, it seemed as if the Reds' soldiers had something or someone to fight for. These two men both played pivotal roles in the Reds' defeat of the Whites in 1918. ...read more.