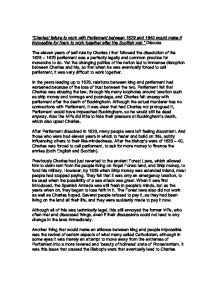 &quot;Charles' failure to work with Parliament between 1629 and 1640 would make it impossible for them to work together after the Scottish war&quot; Discuss.

"Charles' failure to work with Parliament between 1629 and 1640 would make it impossible for them to work together after the Scottish war." Discuss. The eleven years of self-rule by Charles I that followed the dissolution of the 1628 - 1629 parliament was a perfectly legally and common practice for monarchs to do. Yet the changing politics of the nation led to immense disruption between Charles and his, so that when he was eventually forced to call parliament, it was very difficult to work together. In the years leading up to 1629, relations between king and parliament had worsened because of the loss of trust between the two. Parliament felt that Charles was abusing the law, through his many loopholes around taxation such as ship money and tonnage and poundage, and Charles felt uneasy with parliament after the death of Buckingham. Although the actual murderer has no connections with Parliament, it was clear that had Charles not prorogued it, Parliament would have impeached Buckingham, so he would still be dead anyway. ...read more.

When it was first introduced, the Spanish Armada was still fresh in people's minds, but as the years when on, they began to lose faith in it. The Forest laws also did not work as well as Charles hoped. Several people refused to pay it, as they had been living on the land all their life, and they were suddenly made to pay it now. Although all of this was technically legal, this still annoyed the former MPs, who often met and discussed things, even if their discussions could not lead to any change in the laws immediately. Another thing that would make an alliance between king and people impossible was the revival of certain aspects of what many called Catholicism, although in some eyes it was merely an attempt to move away from the extremes of Puritanism into a more revered and 'beauty of holiness' state of Protestantism. ...read more.

It was only due to Laud and the Earl of Stafford, two of his advisers, that Charles called Parliament in the first place. His quick decision to dissolve it so soon after proceedings began suggest that the debates were not going his way, and he responded in a childlike manner, the 'If we're not going to do it my way, we're not going to do it at all' attitude. However due to the ongoing cost of upholding two armies, he was again forced to called Parliament, and this time he knew he was backed into a corner, and so did Parliament. Charles had insufficient funds, and was so at their mercy. They also had certain demands that only he could give. Any work done together from 1640 onwards was for each side's personal gain. There could be no alliance between them without trust. And any trust that might have existed between Charles and his Parliament had been lost over the eleven years of self-rul. ...read more.