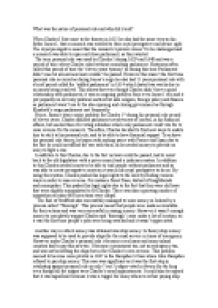 Charles I. What was the nature of personal rule and why did it end?

﻿What was the nature of personal rule and why did it end? When Charles I first came to the thrown in 1625 he also had the same view as his father James I, that a monarch was entitled to their royal prerogative and divine right. The royal prerogative meant that the monarch?s powers weren?t to be challenged and a monarch was able to open and close parliament, as they wanted. The term personal rule was used by Charles I during 1629 and 1640 and was a period of time where Charles ruled without consulting parliament. Historians often called this period of time the ?eleven years tyranny? as during this time Parliament didn?t meet at all and new laws couldn?t be passed. However this wasn?t the first time personal rule occurred as during James?s reign he also had 11 years personal rule with a brief period called the ?addled parliament? in 1614 which lasted two weeks due to no issues being resolved. This shows that even though Charles didn?t have a good relationship with parliament, it was an ongoing problem from even James I rein and it put jeopardy on not only political matters but also religion, foreign policy and finance as parliament wasn?t use to the idea opening and closing government as through Elizabeth?s reign parliament met frequently. ...read more.

Another way in which money was obtained was ship money. In theory ship money was supposed to be used to provide ships for the royal service in times of emergency. However under Charles?s personal rule it became a real issue and many inland counties had to pay this new tax. It became a permanent tax, not an emergency tax, and was not benefiting the ships but in fact Charles?s own revenue. This problem seemed to become more pivotal in 1637 in the Hampden?s Case where John Hampden refused to pay ship money. This case was significant as it was the first step in retaliating against personal rule as only 7 out 5 judges voted in favour for the king even though all the judges were Charles?s royal appointments. It could also be argued that it was significant because it was a trigger for many others to refuse paying ship money. Religion was another issue during Charles?s personal rule as William Laud?s new religious policies were seen as being destructive to the simple church that Elizabeth created. William Laud?s aims for the church was to completely reform the church by raising the educational level of the clergy, enforcing the role of divine right, and reform the way the church was presented so that the ceremonies were more extravagant. ...read more.

the army, Earl of Arunder, was unable to control the army efficiently this lead to Charles, after seeking advice from Earl Strafford, recalling the Short parliament. However the short parliament proved to be a great disappointment to Charles as he needed money and parliament refused to vote subsidies with settling the grievances first .In result of this Charles thought it was beneath him and decided to dissolve parliament after three weeks. Finally the issues discussed in this essays has highlighted that the nature of personal rule period was very controversial and had to end as Charles could not rule England, Scotland and Ireland without sufficient amount of money and the support of Parliament as it first meant that because there wasn?t any parliament it caused a growing in opposition and a growth of puritan networks which is why in the short parliament was hostile to granting subsidies and due to the bishops war he didn?t have sufficient amount of money to train the troops efficiently and the fact that he was so adamant about royal prerogative and divine right that he even introduced William Laud hindered his personal rule even more because puritans didn?t like the fact that Charles was moving towards Arminianism put people in a hostile mood to start of with. ...read more.