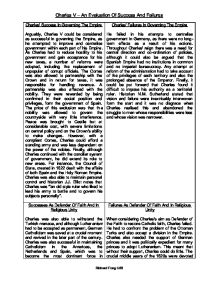 Charles V - An Evaluation Of Success And Failures.

Charles V - An Evaluation Of Success And Failures Charles' Success In Governing The Empire Arguably, Charles V could be considered as successful in governing the Empire, as he attempted to improve and centralise government within each part of his Empire. As Charles had to reduce hostility to his government and gain acceptance for his new taxes, a number of reforms were adopted, including the replacement of unpopular of corrupt officials. The Cortes was also allowed to partnership with the Crown and in return for taxes, it was responsible for handling revenue. A partnership was also affected with the nobility. They were rewarded by being confirmed in their social position and privileges, form the government of Spain. The price of this exclusion was that the nobility was allowed to govern the countryside with very little interference. Peace was brought to Castile but at considerable cost, with severe limitations on central policy and on the Crown's ability to make changes. However, with a compliant Cortes, Charles could afford a standing army and was less dependant on the power of the nobles. Finally, although Charles continued with the conciliar system of government, he did extend its role to new areas. For instance, the Council of State, created in 1522 dealt with the affairs of both Spain and the Holy Roman Empire. ...read more.

Failures As Defender Of Faith And In Religious Unity When considering Charles's aim as Defender of the Faith to restore Catholic faith, Charles failed. He had to confront the problem of the Ottoman Turks and also accept a division in the Empire. Charles also needed the support of German princes and it was politically expedient for many princes to adopt Lutheranism. This meant that without their support, Charles could do little. The crucial middle years of the 1520s were devoted to settling Spain and by the time Charles turned his full attention back to the Empire, the Lutherans had established themselves too firmly to be dealt with easily. The Schmalkaldic League grew in power throughout the 1530s and established contacts with France, England and Denmark. Charles was more concerned with relations with France and the Turks and as a result, his policy in Germany throughout the 1530s consisted of periodic denunciations of heresy combined with toleration in practice while a solution was left to the General Council he repeatedly pressed upon the Pope. This absence of direction meant that the Protestants were able to make steady gains. By 1545 all of north-east and north-west Germany was Protestant as well as large parts of the south and Frederick of Palatinate became a Protestant. ...read more.

Charles was also unable to gain a long-term peace agreement with France and arguably, had failed to destroy the Turkish threat. Finally, the attack on Algiers in 1541 was considered to be a disaster for Charles V. In Germany, the imperial title was preserved but only with the failure to gain real power and the effective fragmentation of the Empire. Successes In Hapsburg Family Ambitions When considering the success of the Habsburg family ambitions, it must be understood that the family was the basis of power and government. Charles was head of the Hapsburg family and maintained the traditions of governing the land as a family orientated business, including marriages that would help to expand the Hapsburg influence in Europe. The marriage between Philip and Mary Queen of England was considered a very valuable agreement, which linked England with Spain and the Netherlands. Failures In Hapsburg Family Ambitions It may be considered that a failure resulted in the fact that Philip and Mary failed to have a son and heir who would have ruled Spain, England and the Netherlands. It could be argued, therefore that this son may have prevented problems in the Netherlands and England becoming a Protestant country. During this period, whenever foreign policy and family interests conflicted, the priority always lay in family interests. Richard Fong U65 ...read more.