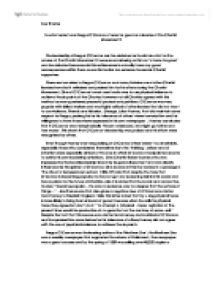 To what extent was Fergus O'Connor a force for good as a leader of the Chartist Movement? The leadership of Fergus O'Connor can be debated as he did do a lot for the causes of the Chartist Movement; however considering as him as 'a force for good' can be debated because did his achievements actually have any good consequences within them or was his tactics too extreme for certain Chartist supporters. There are two sides to Fergus O'Connor and many historians and other Chartist leaders have both criticised and praised him for his efforts during the Chartist Movement. One of O'Connor's most used tactic was to use physical violence to achieve the six points of the Charter; however not all Chartists agreed with this method as many preferred peaceful protests and petitions. O'Connor was very popular with skilled workers and was highly critical of other leaders that did not want to use violence. There is one historian, George Julian Harney, that did maintain some respect for Fergus, praising his for his tolerance of others' views towards him and his willingness to have those views expressed in his own newspaper , Harney concluded that if O'Connor was metaphorically 'thrown overboard, we might go further and fare worse'. ...read more.

In the majority of his speeches O'Connor spoke of being willing ''to die for the cause'' and promising to ''lead people to death or glory''. However O'Connor was one for using phrases and words of physical force as a threat in his rhetoric however this outraged some other Chartist leaders at the time; Lovett and Hetherington. In one speech by O'Connor at Peep Green in July 1839, he implied acts of violence, ''should we be attacked today, come what will, life, death, or victory'' this is proof that O'Connor is prepared to use acts of violence to fight for what he believes to be right, also in this speech O'Connor says ''I am repelling attack by attack.'' This also shows that he is a firm believer of violence and is prepared to use acts of violence. With O'Connor's firm belief of using physical force made moral Chartists become more and more dissatisfied with him. This implies that O'Connor could be a 'force for good' for the Chartist movement in some senses but not in others, for example his rhetoric would have made some people believe and support him however would have made the more moral supports dislike him and thus not agree with his causes and not support him. ...read more.

Also is has been stated that O'Connor was impossible to work with and did not collaborate well with others at all. He always wanted to be boss but he often had no clear policy, especially at the moment of crises when he said first one thing and then another and always came down on what he felt likeliest to be the winning side. Some historians also believe that despite the fact that O'Connor's leadership through his personality united the movement it also divided the leadership. One source that is critical of O'Connor and his actions and motives is a book written by the historian R. G. Gammage 'History of the Chartist Movement, 1837-54'' which stated that despite the appearances of O'Connor he was not as clever as expected, his judgements were often unpredictable and he made a lot of mistakes so thus means less support. ''but this essential quality of greatness he lacked,'' These are all reasons and explanations to how and why O'Connor was not so much of a good leader as some might have fault. In conclusion I think that O'Connor was a successful leader and was a 'cause of good for the Chartist movement' despite all of his flaws he did contribute a huge amount to the cause, he was a very influential leader to many and event though he supported the use of physical force he rarely used it in his protests. ?? ?? ?? ?? Zoe Thaxter ...read more.