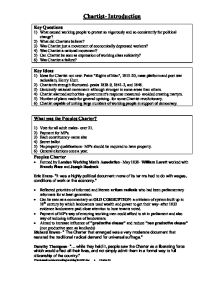 Chartist- Introduction Key Questions 1) What caused working people to protest so vigorously and so consistently for political change? 2) What did Chartists believe? 3) Was Chartist just a movement of economically depressed workers? 4) Was Chartist a national movement? 5) Can Chartist be seen as expression of working class solidarity? 6) Was Chartist a failure? Key Ideas 1) Ideas for Chartist not new- Paine "Rights of Man", 1815-20, mass platform and post war radicalism, Henry Hunt. 2) Chartism's strength fluctuated- peaks 1838-9, 1841-2, and 1848. 3) Genuinely national movement- although stronger in some areas than others. 4) Chartist alarmed authorities- government's response measured- avoided creating martyrs. 5) Number of plans made for general uprising- for some Chartist revolutionary. 6) Chartist capable of uniting large numbers of working people in support of democracy. What was the Peoples Charter? 1) Vote for all adult males- over 21. 2) Payment for MP's. 3) Each constituency- same size 4) Secret ballot 5) No property qualifications- MP's should be required to have property. 6) General elections once a year. Peoples Charter * Formed by London Working Men's Association- May 1838- William Lovett worked with Francis Place and Joseph Roebuck Eric Evans- "It was a highly political document: none of its terms had to do with wages, conditions of work or the economy." * Reflected priorities of informed and literate artisan radicals who had been parliamentary reformers for at least generation. * Can be seen as a commentary on OLD CORRUPTION- a criticism of system built up in 18th century by which landowners used wealth and power to get their way- after 1832 evidence landowners paid close attention to how tenants voted. * Payment of MP's way of ensuring working men could afford to sit in parliament and also way of reducing influence of landowners. * Aimed to increase influence of "productive classes" and reduce "non productive classes" (non productive seen as landlords) ...read more.

* Calm and calculated. * Arrested key leaders but avoided creating martyrs. E.g.. Initially planned to execute Newport leaders but later changed to transportation. Richard Brown- Government reaction conciliatory- allowed Chartists to alienate middle class reformers. * O'Connor and Lovett imprisoned in early 1840- Chartist looked to have been defeated. Edward Royle- "The first stage in the history of Chartist was over, with the men who had shaped its origins safely under lock and key, learning the errors of their ways. Chief of these appeared to be lack of organisation." Overall Richard Brown- "The tone of the movement was beginning to change: it lost some of its early spontaneity and optimism and its belief that the acceptance of the Charter was imminent." Phase 2- 1840-42 1840 February/March Trials begin of various Chartist leaders including Feargus O'Connor July Chartist Conference in Manchester; the National Charter Association [NCA] founded 1841 April Lovett founds National Association of the United Kingdom for Promoting the Political and Social Improvement of the People O'Connor takes up the land question July Peel wins General Election and a Tory government is formed November Joseph Sturge forms Complete Suffrage Union Through later part of 1841 release of various Chartist leaders. 1842 April Chartist Convention in London May Second National Petition defeated in House of Commons by 287 votes to 49 June Death of Samuel Holberry in prison- public funeral in Sheffield- 50,000 pro Chartists followed coffin- listened to Chartist speeches. Summer Massive industrial recession- wage cutting- first started in Longton- Staffordshire. Aug- Sep Industrial unrest- variously called Plug Plot/ General Strike and Chartist Rising 500,000 workers involved in strike Sabotaging boilers and violent unrest as well as peaceful protest Close Cupertino between trade unions and Chartists at local level Arrests of Chartist leaders October Trials of Chartist leaders begin Recovery of trade Key Issues 1) State of party after first rejection * Defeat and mass arrests in 1839-40 had left Chartist in considerable disarray. ...read more.

* Most common area for Chartism were industrial villages and medium sized towns- eg Oldham, Ashton under Lyme, Stockport- * Larger cities and towns lacked community. * Liverpool poor Chartist support in 1839 and 1842 because of ethnic divisions between Irish and English * Movement weak in areas with strong Wesleyan Methodism and Catholicism Gender Role of women in movement neglected until Dorothy Thompson researched issue in 1970's and 1980's. They have been neglected for a number of reasons 1) Feminist historians perceived them as insignificant as Chartists did not demand universal suffrage. 2) Very little source material left- few women ever involved in local leadership. 3) Earlier historians neglected cultural element of Chartism- concentrated on serious political message. Role of women vital in maintaining vibrant Chartist culture. * Women often bore brunt of economic problems- particularly effected by introduction of poor law. They felt full force of Whig betrayal. * Helped organisation of movement- co-ordinated meetings, parties, trips and tea parties. * Boycotted shops who did not support Chartists * Collected for Chartist prisoners, particularly after first rejection. * In mid to late 1840's the role of women in movement becomes increasingly marginalised- maybe consequence of emerging Victorian gender identities. Occupation Only have source material from those high enough up the social ladder to read and write- does this mean that many Chartist supporters can never be identified? * Many Chartists previously skilled workers- jobs down graded by industrial revolution * Strong in textile areas. * Skilled occupations that maintained status remained aloof to Chartism- bookbinding and watch making Issue of those at bottom of society is very difficult to assess. It does need to be recognised though that the level of support and diversity was unprecedented. Were the Chartists working class? * Marx- working class proletariat means non capital owning * However many of Chartists owned shops, small workshops, Maybe that we need broader definition of working class- introduced by James Epstein, D. Thompson and D. Jones. 13 \\SERVERA1\CGP\Chartism- revision.doc A 17-Apr-02 ...read more.