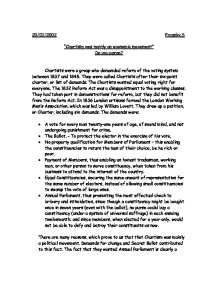 20/01/2002 Prasshy.S "Chartism was mainly an economic movement" Do you agree? Chartists were a group who demanded reform of the voting system between 1837 and 1848. They were called Chartists after their six-point charter, or list of demands. The Chartists wanted equal voting right for everyone. The 1832 Reform Act was a disappointment to the working classes. They had taken part in demonstrations for reform, but they did not benefit from the Reform Act. In 1836 London artisans formed the London Working Men's Association, which was led by William Lovett. They drew up a petition, or Charter, including six demands. The demands were: * A vote for every man twenty-one years of age, of sound mind, and not undergoing punishment for crime. * The Ballot, - To protect the elector in the exercise of his vote. ...read more.

There are many reasons, which prove to us that that Chartism was mainly a political movement. Demands for change and Secret Ballot contributed to this fact. The fact that they wanted Annual Parliament is clearly a political point. They wanted annual Parliament so that they can what is really going on in the country and if any of the MPs are doing fraud work. They also wanted greater representation for all people. This is also a political movement because if they were given representation for all people, even the working class could become MPs and try and change the conditions of the working class. The Chartists also wanted voting for all men over twenty-one. This shows that the working class also wanted to contribute their views to Parliament so that some change could be made to their lives. ...read more.