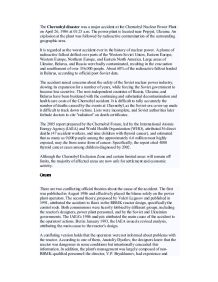 The Chernobyl disaster was a major accident at the Chernobyl Nuclear Power Plant on April 26, 1986 at 01:23 a.m. The power plant is located near Pripyat, Ukraine. An explosion at the plant was followed by radioactive contamination of the surrounding geographic area. It is regarded as the worst accident ever in the history of nuclear power. A plume of radioactive fallout drifted over parts of the Western Soviet Union, Eastern Europe, Western Europe, Northern Europe, and Eastern North America. Large areas of Ukraine, Belarus, and Russia were badly contaminated, resulting in the evacuation and resettlement of over 336,000 people. About 60% of the radioactive fallout landed in Belarus, according to official post-Soviet data. The accident raised concerns about the safety of the Soviet nuclear power industry, slowing its expansion for a number of years, while forcing the Soviet government to become less secretive. The now-independent countries of Russia, Ukraine, and Belarus have been burdened with the continuing and substantial decontamination and health care costs of the Chernobyl accident. ...read more.

Both commissions were heavily lobbied by different groups, including the reactor's designers, power plant personnel, and by the Soviet and Ukrainian governments. The IAEA's 1986 analysis attributed the main cause of the accident to the operators' actions. But in January 1993, the IAEA issued a revised analysis, attributing the main cause to the reactor's design. A conflating version holds that the operators were not informed about problems with the reactor. According to one of them, Anatoliy Dyatlov, the designers knew that the reactor was dangerous in some conditions but intentionally concealed this information. In addition, the plant's management was largely composed of non-RBMK-qualified personnel: the director, V.P. Bryukhanov, had experience and training in a coal-fired power plant. His chief engineer, Nikolai Fomin, also came from a conventional power plant. Dyatlov, deputy chief engineer of reactors 3 and 4, had only "some experience with small nuclear reactors", namely smaller versions of the VVER nuclear reactors that were designed for the Soviet Navy's nuclear submarines. ...read more.

Reports from Soviet and Western scientists indicate that Belarus received about 60% of the contamination that fell on the former Soviet Union. However, the TORCH 2006 report stated that half of the volatile particles had landed outside Ukraine, Belarus and Russia. A large area in Russia south of Bryansk was also contaminated, as were parts of northwestern Ukraine. In Western Europe, measures were taken including seemingly arbitrary regulations pertaining to the legality of importation of certain foods but not others. In France some officials stated that the Chernobyl accident had no adverse effects - this was ridiculed as pretending that the radioactive cloud had stopped at the German and Italian borders. In the immediate aftermath of the accident, two hundred and thirty-seven people suffered from acute radiation sickness, of whom thirty-one died within the first three months. Most of these were fire and rescue workers trying to bring the accident under control, who were not fully aware of how dangerous the radiation exposure (from the smoke) was (for a discussion of the more important isotopes in fallout see fission products). 135,000 people were evacuated from the area, including 50,000 from Pripyat. ...read more.