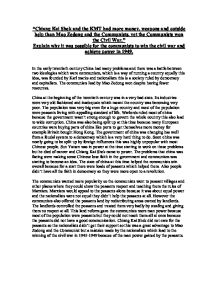 &quot;Chiang Kai Shek and the KMT had more money, weapons and outside help than Mao Zedong and the Communists, yet the Communists won the Civil War.&quot;Explain why it was possible for the communists to win the civil war and achieve power in 1949.

"Chiang Kai Shek and the KMT had more money, weapons and outside help than Mao Zedong and the Communists, yet the Communists won the Civil War." Explain why it was possible for the communists to win the civil war and achieve power in 1949. In the early twentieth century China had many problems and there was a battle between two ideologies which were communism, which is a way of running a country equally this idea, was founded by Karl marks and nationalism this is a society ruled by democracy and capitalism. The communists lead by Mao Zedong won despite having fewer resources. China at the beginning of the twentieth century was in a very bad state. Its industries were very old fashioned and inadequate which meant the country was becoming very poor. The population was very big even for a huge country and most of the population were peasants living with appalling standard of life. Warlords ruled most of china because the government wasn't strong enough to govern the whole country this also lead to wide corruption. China was also being split up at this time because many European countries were buying parts of china like ports to get themselves more money for example Britain bought Hong Kong. The government of china was changing has well from a feudal system to a democracy which is a very hard thing to do. ...read more.

The communists were very low in number compared to the nationalists so the adoption of these tactics was crucial in the communist's stability. The communists also didn't have much ammo and supplies so the made spears and used the rough country side to their advantage when assaulting enemy camps. These tactics enabled communist's forces to defeat nationalist forces up to ten times their size so they used them again in the civil war in 1945-1949 which helped them win it. The fifth extermination campaign was where Chiang Kai Shek got one million troops to surround the communists and slowly move in using the new tactics adopted. These tactics went very well for the nationalists giving the communists not much way out and stopped most supplies getting to them. Meanwhile the communists were using new tactics implemented by Otto Braun which were not very good putting the communists in a bad situation so they made called the long march. The short term causes of the long march were not very good because the communist had to break though the weakest part of the nationalist's army which cost many lives. A good thing that happened in doing this was Mao Zedong came to full power and he was a great leader. They had to walk six thousand miles to yann and lost overall forty five thousand men in doing this march so in the short term it was a very bad thing to happen to them. ...read more.

After being kidnapped and force to unite he started to fight the Japanese. The nationalist got the main force of the Japanese because the communists were in a very good part of china which Japan hadn't invaded much of because they simply didn't have the man power to. Also the communists were in a very good position to claim the land after the Japanese left. So the invasion of china helped the communists get ready for the civil war where it made the nationalists much less ready for it so it is a big part in the way the communists won. Once America and Britain had dropped the bombs on Japan china went into the civil war. By this time Chiang had become increasingly unpopular but still had strong cities and towns. Even though the nationalists had a much better numbered and equipped army the communists went back to guerrilla tactics that helped them greatly. Soon the communists were beginning to get stronger and stronger gaining more peasants and Chiang's army's were depleting in that they were starving and there were strikes and terrible morale. Overall I think all the points above helped the communists win in 1949 overall but the most influential factors were the support form the peasants and the adoption of guerrilla tactics that helped in the end the communists come to power. ...read more.