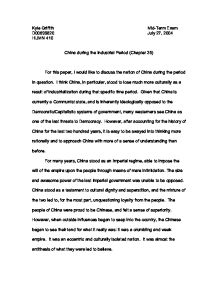 China during the Industrial Period.

Kyle Griffith Mid-Term Exam D00699820 July 27, 2004 HUMN 410 China during the Industrial Period (Chapter 25) For this paper, I would like to discuss the nation of China during the period in question. I think China, in particular, stood to lose much more culturally as a result of industrialization during that specific time period. Given that China is currently a Communist state, and is inherently ideologically opposed to the Democratic/Capitalistic systems of government, many westerners see China as one of the last threats to Democracy. However, after accounting for the history of China for the last two hundred years, it is easy to be swayed into thinking more rationally and to approach China with more of a sense of understanding than before. For many years, China stood as an Imperial regime, able to impose the will of the empire upon the people through means of mere intimidation. The size and awesome power of the last Imperial government was unable to be opposed. China stood as a testament to cultural dignity and superstition, and the mixture of the two led to, for the most part, unquestioning loyalty from the people. ...read more.

As I said, China was self sufficient. Chinese goods traded were traded for gold, seeing as the Chinese felt no need (and no desire) to import other goods from other inferior nations. Only gold, save for one other product: opium. Opium became another chief import of the Chinese, despite its addictive and detrimental attributes. The introduction of opium allowed the intruders to further advance their industrial agendas. So, now that the Chinese were under control, The British and French took this opportunity to further other agendas, as well. Religious recruiting was rampant. Christian missionaries and newly converted Chinese were beginning to question the faith and doctrine that the Empire was based on. More and more people started hearing this message. Workers were being exported from China to work for their new employers, in order to build railroads and such. The peasants left behind began to struggle for land. The empire truly was unraveling. When a new ruler was put into place who tried to westernize China to some degree (including railroads), he was removed and replaced by a more traditional leader. ...read more.

The factors necessary for revolution were all present beforehand: a large unimposing lower class working for a higher class, among other things. There was a lack of global belonging, and this was felt among the people of China, particularly among the working class. However, be it solely responsible or not, industrialization surely served as a catalyst to the eventual fall of the empire. And so, as a whole, China eventually lost what was most important to the people: the cultural purity that was present pre-industrialization. China lost the pride of the infallible Imperial regime. Many superstitions and myths that played a major part in the culture were also lost as a result of the introduction of Christianity. I am not saying that industrialization was a bad thing; I am just saying that China paid a hefty price to join the rest of the industrialized nations. And, which was not mentioned in the book, I believe that China possibly took a step backwards when they became a communist state, which was probably an eventual result of the industrial period. However, as stated earlier, the course of events may well have been unavoidable, and does not make China inherently evil. ...read more.