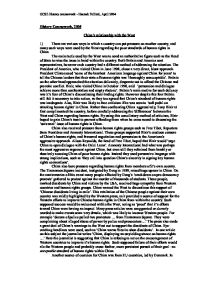 China's relationship with the West 1) There are various ways in which a country can put pressure on another country, and many such ways were used by the West regarding the poor standards of human rights in China.

History Coursework, 2004 China's relationship with the West 1) There are various ways in which a country can put pressure on another country, and many such ways were used by the West regarding the poor standards of human rights in China. The main tactic used by the West was to send an authoritative figure such as the Head of State to raise the issue in hand within the country. Both Britain and America sent representatives, however each country had a different method of addressing the situation. The President of America, who visited China in June 1998, chose a very direct, blunt approach. President Clinton used 'some of the harshest American language against China for years' to tell the Chinese leaders that their state of human rights was 'thoroughly unacceptable'. Britain on the other hand approached the situation delicately, desperate not to offend the Chinese and provoke conflict. Blair, who visited Chine in October 1998, said 'persuasion and dialogue achieve more than confrontation and empty rhetoric'. Britain's main motive for such delicacy was it's fear of China's discontinuing their trading rights. However despite this fear Britain still felt it necessary to take action, as they too agreed that China's standard of human rights was inadequate. Also, Blair was likely to face criticism if he was seen to 'soft pedal on attacking human rights' in China. Rather than confronting China aggressively, Tony Blair at first complimented the country, before carefully addressing the 'differences' between the West and China regarding human rights. By using this conciliatory method of criticism, Blair hoped to gain China's trust to prevent offending them when he came round to discussing the 'universal' issue of human rights in China. China also received pressure from human rights groups such as Free Tibet, Reporters Sans Fronti�res and Amnesty International. These groups supported Blair's cautious censure of China's human rights, and favoured negotiation and persuasion to the American's aggressive approach. ...read more.

In 1858 the Chinese were compelled to sign the Treaty of Tientsin which gave Europeans additional trading rights and made the trading of opium legal. However the Chinese Emperor refused to tolerate Western ambassadors in his capitol, and so the fighting continued until 1860. In 1860 the Convention of Peking was signed, which ended the war. This was supposed to place relationships between China and the West 'on a sound footing and insure the continuance of peace for a long time.' China was opened up to foreign trade. The Chinese opinion was that they had been forced to sign three unequal treaties. In fact the Chinese thought that Britain looked for opportunities to provoke them, in order to start a war which would inevitably result in a Treaty and therefore commercial gain for Britain. The Chinese held a great deal of suspicion regarding the British, whereas the British considered the Chinese to be uncooperative. 2) b) Another event which efficiently demonstrates a poor relationship between China and Western countries in the past is the Korean War. There was a long lasting cold war between China and the West, which led to great enmity between the two countries. After about 1945, as a result of the second world war, Korea was divided into two governments - a communist Northern government led by Kim Li Sung and a non-communist Southern government led by President Syngman Rhee. The North of Korea was under Russian rule, whilst the South was under American rule. This caused hostility between the North and the South. On 25th June 1950 North Korea invaded the South and captured the capital, Seoul. The Americans, the UN (in aid of peace within Korea) and other Western countries such as Britain sent help to South Korea, and initiated a battle to repel the attacks of the North. On 7th October UN troops began to pursue the Communists North. ...read more.

Mr Li, head of the National People's Congress, said 'Democracy may be suitable for the West. However, China has its own conditions'. China also argues that its basic definition of human rights differs from that of the West. Because the country is less developed and much larger than the West, China's people have more basic needs than those of the West. China believes that people need the right of subsistence (i.e. food, clothing and shelter) above all, and that while it is trying to provide all of it's people with these necessities, China has no time for Western luxuries such as political rights for it's people; 'one must be adequately fed and clothed before he can talk about rites and music'. China is also aware that there are some Western countries who are happy to turn a blind eye to China's 'poor human rights' so long as they can still trade with the country. For example the West makes huge profit in China from the trade of opium (to which many Chinese people object). Luxury goods produced in China such as silk and porcelain are highly sought after in the West, and are therefore very profitable for Western countries. Such countries are so interested in the economical profit of trading with China that they are unwilling to risk the relationship due to political disagreements. China therefore sees that it has the 'support' of some Western countries and is satisfied. The West has some influence over human rights in China, using various tactics to pressurise the country into action, but not to the extent and effect that it wishes. Although China is willing to acknowledge the West's claims, it is adamant in its belief that its human rights are acceptable. This is largely due to the poor relationship (and therefore distrust) between China and the West, brought about by past events involving both countries such as the Opium Wars and the Korean War. However it is also due, to some extent, to the Asian values and beliefs of China. ?? ?? ?? ?? GCSE History coursework - Hannah Fulford, April 2004 ...read more.