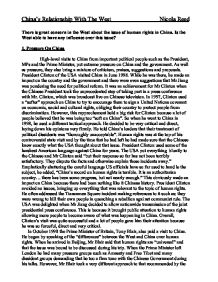 China's Relationship With The West

China's Relationship With The West Nicola Reed There is great concern in the West about the issue of human rights in China. Is the West able to have any influence over this issue? 1. Pressure On China High-level visits to China from important political people such as the President, MPs and the Prime Minister, put extreme pressure on China and the government. As well as pressure, they also bring a mixture of criticism, praises, suggestions and proposals. President Clinton of the USA visited China in June 1998. While he was there, he made an impact on the country and the government and there were even suggestions that Mr Jiang was pondering the need for political reform. It was an achievement for Mr Clinton when the Chinese President took the unprecedented step of taking part in a press conference with Mr. Clinton, which was broadcast live on Chinese television. In 1997, Clinton used a "softer" approach on China to try to encourage them to sign a United Nations covenant on economic, social and cultural rights, obliging their country to protect people from discrimination. However, this rapprochement held a big risk for Clinton because a lot of people believed that he was being too "soft on China". So when he went to China in 1998, he used a different tactical approach. He decided to be very critical and direct, laying down his opinions very firmly. He told China's leaders that their treatment of political dissidents was "thoroughly unacceptable". Human rights was at the top of his controversial state visit and by the time that he had left he had made sure that the Chinese knew exactly what the USA thought about that issue. President Clinton used some of the harshest American language against China for years. The USA put everything bluntly to the Chinese and Mr Clinton said "but their response so far has not been terribly satisfactory. ...read more.

He then notified the foreign traders that although other trade would be conducted as usual, if opium appeared again, the goods would be confiscated and traders would be punished according to law. The British traders were not happy with the situation because it would mean a great loss in money and trade. Also, the British government was outraged by the Chinese confiscation of the opium and they claimed that the Chinese were acting illegally and that they were provoking British subjects based in China. The British were concerned that their subjects abroad should be properly protected. They were angered that the Chinese should use such provocative tactics and they felt that they needed to be taught a lesson. So Britain responded to the confiscation of the opium by sending an expedition of warships to the city of Guangzhou in February 1840 and in the Chinese point of view they started an "aggressive" war. The Chinese say that they gave numerous warnings to Britain but they just ignored them. The British won a quick victory, mainly because they had more technically advanced weapons and a larger more powerful Empire with better tactics, and they demanded reparation. However, the Chinese refused and so after further tension, the British bombarded Canton and seized Hong Kong. The Treaty of Nanking ended the conflict on August 29, 1842, which the Qing government was compelled to sign even though they considered it to be unequal. By this treaty, and a supplementary one signed on October 8, 1843, China was forced to pay a large indemnity, open five ports, Guangzhou, Fuzhou, Xiamen, Ningpo and Shanghai to British trade and residence, and cede Hong Kong to Britain. The treaty also gave British citizens in China the right to be tried in British courts. Other Western powers demanded, and were granted, similar privileges. This ended the First Opium War and Britain established a strong trading position in China. ...read more.

They also believe that each civilisation has good points and the Western model is not the only way to modernisation. The Chinese think that the US is ignorant because they should respect their different views and different culture, but they have not done so. For example, far more Chinese know English than American, far more books on America have been published in China than books on Asia in the US and far more media coverage on the US appears in China than the reverse. Asia reveals that just as Asia has benefited from both Western and Eastern wisdom, the future world civilisation should be a combination of the two traditions. The West did not agree with this and thought that everything should be done in their footsteps. This disagreement also influenced China's response to the West's interest in their human rights record. Another minor, but important, factor is that the Chinese define human rights in a different way to the West; their views do not coincide. China wants to feed its population and reduce all of the poverty in the country before giving all of its people political freedom. The Chinese government says, "One must be adequately fed and clothed before he can talk about rites and music. If survival is in question, what freedom can we talk about?" Also, Mr Li said, "Democracy may be suitable for the West. However, China has its own conditions. We are a developing country with a large population." The Chinese point of view is that they have the right to feed the people first as that is the most important thing at the moment and is more important. When people are fed and surviving then political rights can be discussed and decided on. However, if survival is in question then feeding the people who are suffering in pain and might die is much more important than political rights. The USA has a conflicting opinion to this so it does create friction between them and could influence China's attitude towards them on the issue of human rights. ...read more.