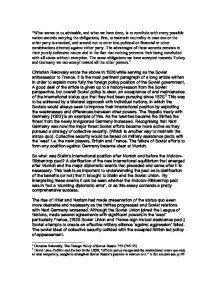 Christian Rakovsky wrote the above in 1926 while serving as the Soviet ambassador to France. It is the most pertinent paragraph of a long article written in order to explain more fully the foreign policy position of the Soviet government.

"What seems to us advisable, and what we have done, is to conclude with every possible nation accords carrying the obligations, first, to maintain neutrality in case one or the other party is attacked, and second not to enter into political or financial or other combinations directed against either party. The advantages of these accords consists in their purely defensive nature and in the fact that nothing prevents their being concluded with all states without exception. The same obligations we have accepted towards Turkey and Germany we can accept toward all the other powers.1 Christian Rakovsky wrote the above in 1926 while serving as the Soviet ambassador to France. It is the most pertinent paragraph of a long article written in order to explain more fully the foreign policy position of the Soviet government. A good deal of the article is given up to a history-lesson from the Soviet perspective, but overall Soviet policy is clear, an acceptance of and maintenance of the international status quo that they had been pursuing since 1920.2 This was to be achieved by a bilateral approach with individual nations, in which the Soviets would always seek to improve their international position by exploiting the weaknesses and differences between other powers. The Rapallo treaty with Germany [1922] is an example of this. As the twenties became the thirties the threat from the newly invigorated Germany increased. Recognising that Nazi Germany was now the major threat Soviet efforts became more active as they pursued a strategy of collective security. ...read more.

The German charge d'affaires in Moscow reported to Berlin on May 3rd 1939: "...Molotov, who is not a Jew, has the reputation of being the 'most intimate friend and collaborator' of Stalin. His appointment is obviously intended to provide a guarantee that foreign policy will be conducted strictly on lines laid down by Stalin."11 William Shirer, whose credentials as a journalist outweigh his abilities as a historian, nevertheless makes a strong point as to just what Litvinov's dismissal might mean for Soviet foreign relations. "The significance of Litvinov's abrupt dismissal was obvious to all. It meant a sharp violent turning in Soviet foreign policy. Litvinov had been the archapostle of collective security, of strengthening the power of the League of Nations, of seeking Russian security against Nazi Germany by a military alliance with Great Britain and France."12 His argument has a basis in fact as the future speeches and actions of Molotov bear out. The newly appointed foreign minister lambastes the British and French in a speech to the Supreme Soviet on 31st May 1939. He reminded them that the British and French [went]..."further in making concessions at the expense of Czechoslovakia than they had any right to go." He called Munich a 'disaster' pointing out that far from averting a European war, the events at Munich instead led to further German aggression. [German occupation of the rest of Czechoslovakia] Germany he argues, was able to do this "so smoothly, that the question arises, what was in fact the real purpose of the Munich negotiations?"13 This may have been 'posturing' by the Soviets but it came from the highest level. ...read more.

This is paradoxical certainly because although eastern Poland can be viewed as a 'buffer zone' between Germany and the Soviet Union proper before Soviet occupation, afterwards it meant that the two powers faced each other directly on a much longer front. Stalin could be pleased too at the prospect of a possible political backlash by Italy and Japan. In Japan this happened very soon, the Government resigned feeling betrayed and dishonoured by Germany.23 In July Zhukhov defeated the Japanese at Khalkin-Gol and in August the whole Kwangtung army. The Nazi-Soviet pact and this double defeat of the Japanese removed very quickly over the summer the main security conundrum that had been confronting the USSR for years. "Taken together with the Nazi-Soviet Pact, this removed the danger of war from both Russia's exposed fronts, in the east as well as in the west."24 In conclusion this essay can only say that the Nazi-Soviet Pact was rather a 'stunning success' (as it would have appeared to Stalin in 1939) than a failure. For years the USSR struggled to obtain recognition and maintain the status quo. After the failure of the Soviet collective security policy at Munich, barely one year later the USSR can boast that threats from Germany in the west and Japan in the east (at least in the short term) are over. Germany, Britain, and France are at war with each other. The USSR has gained significant territory and also extended her sphere of influence greatly over Finland, Estonia, Latvia and Bessarabia. She also regained those parts of the Ukraine and Byelorussia lost to Poland in the 1920-21 war. ...read more.