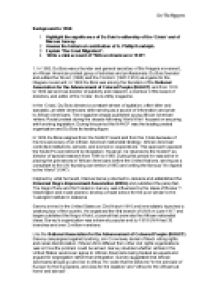 ﻿Do Thi Nguyen Background to 1950: 1. Highlight the significance of Du Bois?s editorship of the ?Crisis? and of Marcus Garvey. 2. Assess the historical contribution of A. Phillip Randolph. 3. Explain ?the Great Migration?. 4. Write a mini account of ?African American in 1945?. 1. In 1905, Du Bois was a founder and general secretary of the Niagara movement, an African American protest group of scholars and professionals. Du Bois founded and edited the ?Moon? (1906) and the ?Horizon? (1907-1910) as organs for the Niagara movement. In 1909 Du Bois was among the founders of the National Association for the Advancement of Colored People (NAACP) and from 1910 to 1934 served it as director of publicity and research, a member of the board of directors, and editor of the ?Crisis?, its monthly magazine. In the ?Crisis?, Du Bois directed a constant stream of agitation--often bitter and sarcastic--at white Americans while serving as a source of information and pride to African Americans. The magazine always published young African American writers. Racial protest during the decade following World War I focused on securing anti-lynching legislation. During this period the NAACP was the leading protest organization and Du Bois its leading figure. In 1934 Du Bois resigned from the NAACP board and from the Crisis because of his new advocacy of an African American nationalist strategy: African American controlled institutions, schools, and economic cooperatives. ...read more.

President Harry S. Truman abolished racial segregation in the armed forces through Executive Order 9981 on July 26, 1948. Randolph was also notable in his support for restrictions on immigration. In 1950, along with Roy Wilkins, Executive Secretary of the NAACP, and, Arnold Aronson a leader of the National Jewish Community Relations Advisory Council, Randolph founded the Leadership Conference on Civil Rights (LCCR). LCCR has since become the nation's premier civil rights coalition, and has coordinated the national legislative campaign on behalf of every major civil rights law since 1957. 3. The Great Migration was the movement of 7 million African-Americans out of the Southern United States to the North, Midwest and West from 1910 to 1970. Precise estimates of the number of migrants depend on the time frame. African Americans migrated to escape racism and seek employment opportunities in industrial cities. When World War I halted immigration from Europe while stimulating orders for Chicago's manufactured goods, employers needed a new source of labor for jobs assumed to be ?men's work.? Factories opened the doors to black workers, providing opportunities to black southerners eager to stake their claims to full citizenship through their role in the industrial economy. For black women the doors opened only slightly and temporarily, but even domestic work in Chicago offered higher wages and more personal autonomy than in the South. ...read more.

Discrimination in politics was normal in America in 1940 as only two percent of black Americans were allowed to vote. However by 1947, as a result of the Supreme Court decision that outlawed the white primary in Texas, twelve percent of black Americans were allowed to vote. A few black people actually managed to get elected as state legislatures and in New York Adam Clayton Powell went further and was elected to the federal House of Representatives. However, this was still unfair and until discrimination in politics ended blacks could not seriously expect to gain equal rights. So, it is clear that in 1945 blacks faced all kinds of discrimination in their everyday life. However, after the war there was an increase in black consciousness as blacks came together and discussed possible solutions to racism. A number of black newspapers were set up and the 'double V' campaign was launched. The NAACP grew from having 50,000 members to having 450,000 members and finally now blacks were starting to make them heard. In conclusion blacks faced social, economic and political discrimination in 1945 that was arguably worse than when they were slaves. Many black men had fought in the Second World War for America and they were still not considered as equals when they returned home. However, blacks wanted equality now more than ever and although progress was limited they were still, at least, making progress. ...read more.