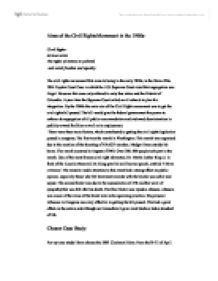 Aims of the Civil Rights Movement in the 1960s- Ci.vil Rights- PLURAL NOUN The rights of citizens to political and social freedom and equality. The civil rights movement first came to being in the early 1950s, in the form of the 1954 Topeka Court Case in which the U.S. Supreme Court ruled that segregation was illegal. However this case only referred to only four states and the District of Columbia. A year later the Supreme Court called on all schools to plan for integration. By the 1960s the main aim of the Civil Rights movement was to get the civil rights bill passed. The bill would give the federal government the power to enforce de-segregation of all public accommodation and outlawed discrimination in publicly owned facilities as well as in employment. There were three main factors, which contributed to getting the civil rights legislation passed in congress. The first was the march in Washington. ...read more.

Of the cited fifteen black men three (including Thomas) had not used deadly weapons against the police. Despite all the situations that lead to the deaths of the men, no police were ever found guilty through any civil or criminal trials. On the 9th of April 2001 around 200 black Cincinnati residents, including Thomas's mother entered the City Council Chambers. The group had interrupted a council meeting demanding details of the incident and the immediate accountability for the death of Thomas. The crowd had carried signs which bore words such as "Stop killing us or else". The riots began in at night when a group was peacefully protesting in police presence outside of City Hall. The police dispersed the group. The group then moved into the CBD where they started to riot. There was violence against whites and non-blacks that were in the area at the time. Businesses were looted; shops damaged and small fires were set. ...read more.

There were also throw backs to the 1960s with the blacks peacefully protesting outside of City Hall and just like the 1960s the police dispersed them. Reported in the Cincinnati Post was the case of Bomani Tyhimba he had filed a lawsuit against the City for holding him longer than needed for two traffic violations. This report was in March, a month before the riots. Issues That Need to be Addressed- Many issues need to be addressed regarding the disadvantaged blacks and their communities. The ones who were the largest groups in the mobs were the young black males. This is either because they felt that the government was not doing enough to enforce the civil rights act and keep them safe from discrimination or that the civil rights act was not enough. There is still quite an un-easy tension between blacks and whites in the US. These should be addressed instead of being ignored and swept under the rug by the government. ...read more.