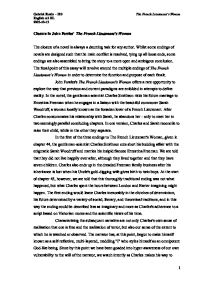 Closure in John Fowles' The French Lieutenant's Woman The closure of a novel is always a daunting task for any author. Whilst some endings of novels are designed such that the main conflict is resolved, tying up all loose ends, some endings are also assembled to bring the story to a more open and ambigous conclusion. The focal point of this essay will revolve around the multiple endings of The French Lieutenant's Woman in order to determine the function and purpose of each finale. John Fowles's The French Lieutenant's Woman offers a rare opportunity to explore the way that previous and current paradigms are enfolded in attempts to define reality. In the novel, the gentleman-scientist Charles Smithson risks his future marriage to Ernestina Freeman when he engages in a liaison with the beautiful commoner Sarah Woodruff, a woman locally known as the forsaken lover of a French Lieutenant. After Charles consummates his relationship with Sarah, he abandons her - only to meet her in two seemingly parallel concluding chapters. In one version, Charles and Sarah reconcile to raise their child, while in the other they separate. ...read more.

For the purpose of analyzing these final two endings, and the strategies involved, it will be helpful to review the basic textual differences. In the first ending, given in chapter 60, Charles and Sarah eventually come together after a fairly long separation, while in the second ending given in chapter 61 they meet a final time and decide to separate. The narration of the final encounter in both chapters includes two identical paragraphs but between which in chapter 60 and missing from chapter 61 is an expression of melodrama illustrating Charles' despair and personal tragedy reflected in Sarah's eyes, and that ultimately results in Sarah lowering her head. The deletion of this paragraph from chapter 61 thus has a twofold effect: our sense of the time-line of the novel has been altered by the excision of a moment from the lives of Charles and Sarah, and Charles has been relieved of the broader implication of tragedy which has been, up to this point, Sarah's province. Thus when the narrator continues in chapter 60, Sarah runs to block his exit, and subsequently gives him a reason to stay, whereas in chapter 61 the encounter concludes with Charles's departure. ...read more.

These different sets of events are present, not in what we see between Charles's meeting with Sarah in Exeter to London, but in what we do not see. The absence of Sarah from the narrative after Exeter constructs, in effect, an implicit narrative, which superimposes one part of the pattern over another. The core story of Charles Smithson, appropriate to the Victorian Era, evolves along Darwinian lines, while the external wrapper of Sarah Woodruff engages a point-of-view more indicative of the post-modern reality of the author, narrator, and reader. We might hypothesize that what the novel is really about in the sense of meaning is how the wrapper is created about, or around, the core. In conclusion, the multiple endings of The French Lieutenant's Woman are designed and used to promote an overall sense of ambiguity. Whilst some readers may prefer to simply chose one of the endings, it is also possible to observe how the core narrative that involves the story of Charles Smithson, can be enveloped by the various endings which ultimately form an overall sense of meaning and unity. Thus the function of the multiple-ending narrative is not only that of Fowles being hesitant in creating a single and concrete ending. Word Count: 1193 Gabriel Iliesiu - IB2 The French Lieutenant's Woman English A2 HL 2003-10-13 1 ...read more.