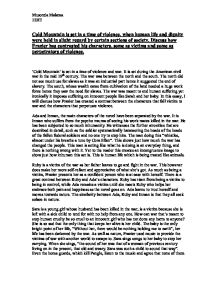 Cold Mountain is set in a time of violence, when human life and dignity were held in slight regard by certain sections of society. Discuss how Frazier has contrasted his characters, some as victims and some as perpetrators of violence.

Cold Mountain is set in a time of violence, when human life and dignity were held in slight regard by certain sections of society. Discuss how Frazier has contrasted his characters, some as victims and some as perpetrators of violence. 'Cold Mountain' is set in a time of violence and war. It is set during the American civil war in the mid 19th century. The war was between the north and the south. The north did not see much use for slaves as it was an industrial part hence it suggested the end of slavery. The south, whose wealth came from cultivation of the land needed a huge work force hence they saw the need for slaves. The war was meant to end human suffering yet ironically it imposes suffering on innocent people like Sarah and her baby. In this essay, I will discuss how Frazier has created a contrast between the characters that fall victim to war and the characters that perpetuate violence. Ada and Inman, the main characters of the novel have been separated by the war. ...read more.

There is a great contrast between Ruby and Ada's characters. Ruby has risen from being a victim to being in control, while Ada remains a victim until she meets Ruby who helps her embrace both pain and happiness as the novel goes on. Ada learns to trust herself and moves towards nature. The similarity between Ada, Ruby and Inman is that they all seek solace in nature. Sara is a young girl whose husband has been killed in the war, is a victim because she is left with a sick child to tend for with no help from any one. How can war that's meant to stop human cruelty be so cruel to an innocent girl who has not done any harm to anyone? She is so sad that the only thing that keeps her alive is her child. The baby is the only bright point of her life, "Without her, there would be nothing holding me to earth", her life has been darkened by the war. As well as nature, Frazier used music to provide the victims of war with another world to escape to. ...read more.

The musical instruments are very ironic as it is the men carrying them that die instead of the men carrying guns. Teague goes around killing people who have neglected their duty as fighters of the war. This is a self given job for Teague as he wouldn't get into trouble with the authorities if he didn't do this. Teague is an example of how men who went to war have been traumatized and led into acting like animals. His inhumane actions can be seen when he tells Pangle to cover his head with a hat because his men couldn't "shot at a grinning man". Teague's presence "brings with it a familiar terrain of violence" to Inman. This gives readers an idea of what Teague might be like (probably a rough looking man). It is Teague's boy that kills Inman in the end. We now know that the war had different effects on people. For people like Ruby, it made them stronger and independent, for people like Sara, it brought nothing but sadness, it separated Ada and Inman, others lost their best friends like Stabrod and for some people, well, it brought out the worst in them. ?? ?? ?? ?? Musonda Malama 12HT ...read more.