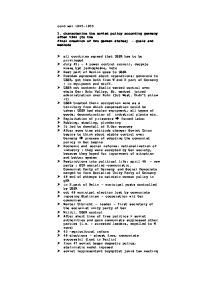 cold war 1945-1953 1. characterize the soviet policy according germany after 1945 [to the final creation of two german states] - goals and methods > all countries agreed that USSR has to be privileged > July 45: - 4 power control council, decyzje musza byc jednoglosne, veto > East part of Berlin goes to USSR > Postdam agreement about reparations: generous to USSR, got them both from W and E part of Germany : in equipment and stuff. > USSR not content: Stalin wanted control over whole Ger: Ruhr Valley, St. wanted joined administration over Ruhr (but West. Didn't allow it) > USSR treated their occupation zone as a territory from which compensation could be taken: USSR had stolen equipment, all types of goods, deconstruction of industrial plants etc. > Exploitation of prisoners ==> forced labor > Robbing, stealing, plundering > It led to downfall of E.Ger economy > After some time attitude change: Soviet Union begins to think about stable control over Germany ==> process of adopting the communist policy in Ger begins > Economic and social reforms: nationalization of industry : they were accepted by Ger society, because they hoped for imporvment of situation and better system > Restrictions into political life: april 46 - new party : SUD socialist-communistic. Communist Party of Germany and Social Democrats merged to form Socialist Unity Party of Germany > 46 end of attemps to maintain common policy in gER > in E.part of Belin - municipal posts controlled by USSR > oct 46 ...read more.

The effects of the development of the Cold War International relations were dominated by the Cold War and all conflicts tended to be seen in terms of the struggle btw the USA and the USSR � international relations were bipolar. Europe was divided with a clear line of demarcation btw the capitalist west and the communist east. Germany was not united: instead western and eastern zones gained independence separately and were not prepared to recognize each other. No peace treaty was signed with Germany: sense of insecurity amongst countries of E.E. (this was solved in 1975 at the Helsinki Conference) Unity in western Europe was encouraged by the Soviet threat and USA who hoped that western European states would play a greater part in their own defences. USSR tightened its control over the E.E. states � setting up of one party states. USA abandonned its policy of avoiding peacetime commitments: it was instrumental in setting up of NATO and other regional forces. USA adopted the policy of containment � led to US involvement all over the world assuming that any communist group was acting upon the orders of Moscow (i.e.: Korea, Vietnam) � USA became the 'world policeman�. UN was never able to fulfil the role which Roosevelt had envisaged (peaceful settlement of international disputes) b/c of the veto power of both the USA and USSR. The Cold War spreads to the East By 1949, the position in Europe was static: the last attempt to change the balance (Berlin Blockade) ...read more.

Warsaw, Berlin, Prague, Vienna, Budapest, Belgrade, Bucharest and Sofia, all these famous cities and the populations around them lie in what I must call the Soviet sphere, and all are subject in one form or another, not only to Soviet influence but to a very high and, in many cases, increasing measure of control from Moscow this is certainly not the Liberated Europe we fought to build up. Nor is it one which contains the essentials of permanent peace. 4. the Truman doctrine: its contents and circumstances it was proclaimed events in Greece; communists trying to overthrow the monarchy, GB troops, who had liberate Greece from Ger in 44 restored then the monarchy, now had to support Greece those loyal to king, against the Greece's communists, who received help from Albania, Bulgaria and Yugoslavia. Bevin, GB Foreign Ministered appealed to USA. Truman said (speech to congress, 12 march 47) that US will support (both econ, and milit.) all free people and nation which are resisting outside or inside (i.e. minorities )pressures made in order to subordinate them. At the beginning this refered only to Turkey and Greece and their situation, but then it concerned all the countries endangered by communism pressure. > Greece got arms. Supplies, it defeated communists. Turkey received ~60 mil $ US committed to a policy of containing communism, not only in Europe - worldwide - end of policy of isolationism ...read more.