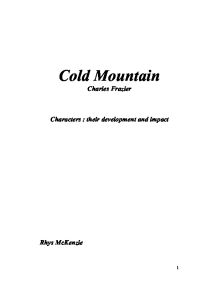 Cold Mountain Charles Frazier Characters : their development and impact Rhys McKenzie Section 1 Inman 1. Inman is left psychologically scarred by memories of war and the ghosts of his fellow soldiers who have died fighting. The war turned Inman into a very violent person, one who is brutal and holds little regard for human life as he resorts to violence a great deal through out his travels. His meeting with Sara results in violence when he kills the three Federals who stole her pig and trashed her house. Whilst being ashamed of the killings he is able to deal with having the following thoughts, "Inman decided to view what was before him in this context: next to the field in front of the sunken road at Fredericksburg or the accumulated mess at the bottom of the crater, this was nothing. At either place he had probably killed any number of men more satisfactory in all their attributes than this Eben. Nevertheless, he figured this might be a story he would never tell." (Page 306) As the war draws on he becomes disillusioned with the idea of patriotism and longs only to return home to Cold Mountain as he finds his surroundings to be vile compared to his homeland. 2. Swimmer, the Cherokee boy Inman met when he was sixteen, encourages him to explore the idea that the mountains are gateways to a world above heaven where a "celestial race" live as well as explaining about the nature of the soul. ...read more.

would follow this old man to Liberia if he asked me to do so" p.50 It is because of this that she initially has great trouble dealing with Monroe's death and making the life decisions she now has to do alone. Having been used to Monroe providing all the required solutions, both financially and with hired help, she has no ability to now solve her present dilemma. Her close relationship with Monroe has also made her a caring person, possibly due to that fact that she accompanied Monroe on his missionary visits. An example of this compassion is when she insisted that Ruby put padding on the trap in the case that the robber was a human. Whilst not having any of the practical skills which are useful for her present situation, the desire for self improvement and self reflection which she learnt with Monroe are the attributes which help her overcome her present situation. Once Ruby arrives and helps her with the basics, Ada begins the journey on her new path of self improvement, learning as much as she can about the land and how to work with it and make it work for her. It is this openness for knowledge which she learnt as a daughter of Monroe, that now makes her receptive to the introduction of new skills and knowledge. ...read more.

He had been a lady's man and he "told also of how women flung themselves at him in his travels..."(Page 200). He complained about his current situation with his wife and her sisters who have moved in and how he was unable to divorce his wife. They learn that he is a very violent man from the story his wife's sister tells of how he beheaded a man and his dog. Also because Junior told them that the only way he could fix his sad live is if he cut all their throats when they were sleeping. For Junior the war had been a source of income for he sold deserters to the Home Guard for $5 each. Because of his choice to sell off Inman he dies as Inman then comes back for revenge and kills him by hitting him with his pistol. Teague Teague is the leader of a band of Home Guard. He is a violent and ruthless sadist who is mentioned by Swangers with fright and hatred, his execution of Pangle and other outliers in the novel show this. The war had let him do these terrible things without vengeance from the community as most of the men were out fighting the war. Teague may have joined the Home Guard as he was too scared to join in the actual war in case he had been injured or killed. His crimes do come back to get him though as when he confronts Inman, Inman kills him. 1 ...read more.