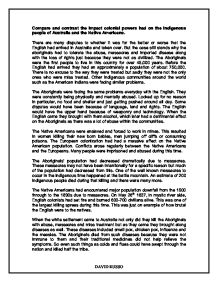 Colonial powers: Indigenous people of Australia and the Native Americans

Compare and contrast the impact colonial powers had on the indigenous people of Australia and the Native Americans. There are many disputes to whether it was for the better or worse that the English had arrived in Australia and taken over. But the case still stands why the aboriginals had to tolerate the abuse, massacres and imported disease along with the loss of rights just because they were not as civilized. The Aboriginals were the first people to live in this country for over 45,000 years. Before the English had arrived they had an approximately a population of about 750,000. There is no excuse to the way they were treated but sadly they were not the only ones who were miss treated. Other indigenous communities around the world such as the American Indians were facing similar problems. The Aboriginals were facing the same problems everyday with the English. They were constantly being physically and mentally abused. ...read more.

An estimate of 200 indigenous people died during that killing and there were many more. The Native Americans had encountered major population downfall from the 1500 through to the 1890s due to massacres. On May 26th 1637, in mystic river side, English colonists had set fire and burned 600-700 civilians alive. This was one of the largest killing sprees during this time. This was just on example of how brutal the English were to the natives. When the white settlement came to Australia not only did they kill the Aboriginals with abuse, massacres and miss treatment but as they came they brought along diseases as well. These diseases included small pox, chicken pox, influenza and the measles. The Aboriginals died from such diseases because they were not immune to them and their traditional medicines did not help relieve the symptoms. So even such things as colds and flues could have swept through the nation and killed half the tribe. ...read more.

They were not allowed to even use them after they were built. As the Europeans entered America they miss treated the natives improperly. Slaves were put into mines or on land and forced to work. As new people came into the land the old people were relocated and forced to change their way of life. This slowly reduced birthrates therefore slowly reducing the population. The European settlement was much alike as the English in Australia. They gave the natives minimal rights or nor rights at all. They massacred tribes and destroyed ancient ground. They brought in the natives and enslaved them, made them speak differently and act differently thus destroying the population and race. Diseases were brought in from over seas either by human or animal and just the way they treated the indigenous people was unacceptable. But unfortunately they were not the only two facing the same problems. There were many more with bigger problems and some were irreversible. What the colonists needed to do is perhaps make friends with the indigenous people and respect their rights, land and race but still build a better future. ?? ?? ?? ?? DAVID RUSSO ...read more.