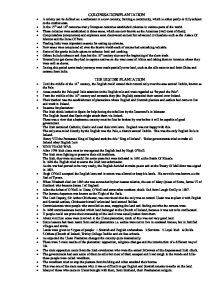 COLONISATION/PLANTATION * A colony can be defined as: a settlement in a new country, forming a community, which is either partly or fully subject to the mother state. * In the 15th and 16th centuries many European countries established colonies in various parts of the world. * These colonies were established in those areas, which are now known as the Americas (well most of them). * Conquistadors (conquerors) and explorers soon discovered ancient but advanced civilisations such as the Aztecs Of Mexico and the Incas Of Peru. * Trading links were important reasons for setting up colonies. * New areas were conquered all over the known world-each of course had something valuable. * Some of the goods include spices to enhance food and cooking. * Others Include tobacco and dyes but the 16th century also saw the beginning of the slave trade. * Normally to get slaves they had to capture natives on the west coast of Africa and taking them to America where they were sold as slaves. * During this period some trade journeys were made partially over land, such as the silk route to and from China and cottons from India. THE ULSTER PLANTATION * Until the middle of the 16th century, the English could extend their control only over the area around Dublin, known as the Pale. * Areas outside the Pale paid little attention to the English rule and were regarded as "beyond the Pale". * From the middle of the 16th century and onwards they (the English) extended their control over Ireland. * Their method was the establishment of plantations where English and Scottish planters and settlers had come to live and work in Ireland. * Reasons for plantation: The Irish chiefs looked to Spain for help during the rebellion by the Desmond's in Munster. The English feared that Spain might attack them via Ireland. There was a view that a barbarous country must be first be broken by war before it will be capable of good government. ...read more.

* As a result, a small number of Catholics nobles began plotting against the king, and this led to the Gunpowder Plot of 1605. THE GUNPOWDOR PLOT * When James became King in 1603, he did not favour the Catholics. * Therefore the Catholic nobles decided to take over the government of England by killing the King and the most important men in the country, when they were together at the state opening of Parliament on 5th November 1605, and out a new Catholic king on the throne. * It now appears very likely that some people close to the king knew of this plot and were prepared to let the plotters go so far as to be found guilty of treason and executed. * The plotters rented a cellar beneath the Houses of Parliament without apparently wondering how such good fortune should come their way so easily. * There they stored 36 barrels gunpowder, again with relative ease, never wondering how it could be so easy to do so. * They hid the gunpowder under a pile of firewood and laid a trail of it to the door. The plotters assumed it would take about fifteen minutes from its ignition until the explosion would take place. * The plot failed because one of the plotters, Francis Tresham, tried to warn his brother-in-law, Lord Monteagle, to stay away from the state opening of Parliament. * Tresham sent a very mysterious letter to Monteagle and it was shown to James I. * The letter raised the King's suspicions and he ordered a search of the cellars of the House of Lords on the 4th November. * This led to the arrest of Guy Fawkes and after being tortured in the Tower of London, He confessed his role in the Gunpowder Plot. CHARLES I AND PARLIAMENT * He was born in 1600, second son of James VI of Scotland and Queen Anne. ...read more.

WAR IN EUROPE * In 1688 war broke out in Europe between the French king, Louis XIV, and a league of European states, known as the Grand Alliance. This war lasted until 1697. * The Grand Alliance was led by William of Orange and consisted of the Spanish king whose Empire included the Spanish Netherlands; the Holy Roman Empire who ruled the German states; and the rulers of Prussia and Bavaria. * War broke out because the Grand Alliance wanted Louis defeated so that Europe could be at peace. * James II did not join the Grand Alliance in 1688 as he felt that England was in no danger at that time and because he wanted to remain on good terms with the Dutch and the French. * James had become king of England in 1685 and even though he was a Catholic, no one really objected him. * Later Parliament became suspicious of the king because he kept a large army and also promoted many Catholics to officer status. He tried to introduce forms of religious tolerance for non-Anglicans (people who were not members of the Church of England). * James heir to the throne was his elder daughter, Mary, who was married to William of Orange. * In June 1688 James second wife, Mary of Modena, had a Catholic son. The boy-who was a Catholic-would succeed his father, displacing his to older Protestants, Mary and Anne. * To prevent a Catholic becoming king, the English parliament invited William of Orange, Mary's husband, to take the English throne. * William landed on the south coast of England in November 1688 and moved to London. * James II, with his wife and son fled to France. * William and Mary were made joint monarchs in February 1689, this was known was the Glorious Revolution. * Though William hoped to add English support to his struggle against Louis XIV, he soon found that his attention was diverted to the events in Ireland. ...read more.