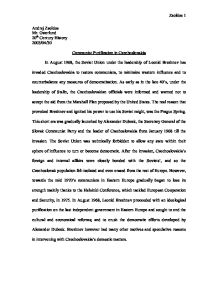 Andrej Zsoldos Mr. Osterlund 20th Century History 2003/04/30 Communist Purification in Czechoslovakia In August 1968, the Soviet Union under the leadership of Leonid Brezhnev has invaded Czechoslovakia to restore communism, to minimize western influence and to counterbalance any measures of democratization. As early as in the late 40's, under the leadership of Stalin, the Czechoslovakian officials were informed and warned not to accept the aid from the Marshall Plan proposed by the United States. The real reason that provoked Brezhnev and ignited his power to use his Soviet might, was the Prague Spring. This short era was gradually launched by Alexander Dubcek, the Secretary General of the Slovak Communist Party and the leader of Czechoslovakia from January 1968 till the invasion. The Soviet Union was technically forbidden to allow any state within their sphere of influence to turn or become democratic. After the invasion, Czechoslovakia's foreign and internal affairs were closely bonded with the Soviets', and so the Czechoslovak population felt isolated and even erased from the rest of Europe. However, towards the mid 1970's communism in Eastern Europe gradually began to lose its strength mainly thanks to the Helsinki Conference, which tackled European Cooperation and Security, in 1975. ...read more.

These leaders were mainly concerned about their communist party being overthrown and weakened if by any chance the democratization efforts and movements would reach their countries. The only Eastern European country's ruler that agreed and supported Dubcek's actions was Tito in Yugoslavia. (Schlesinger 84-85) However, Leonid Brezhnev was the most upset and uneasy regarding Czechoslovakia's movement towards democracy and liberality. At the climax of the Prague Spring, in March, Brezhnev announced in a speech that he would no longer accept and abide by Dubcek's disgraceful measures. Nonetheless, Dubcek did not get threatened. The Soviet leader could not tolerate Dubceks's policies and so in late July he insisted on a personal meeting with him on the Soviet-Czechoslovak border. Brezhnev tried to intimidate and oppress Alexander Dubcek to immediately mitigate the reforms and obliterate any efforts of democratization. However, the Soviet speculative mind had not settled for negotiations, and so Brezhnev, in his usual and expected manner, took the violent route. Besides his negativistic attitude towards this struggle, he also received pressures and requests from fellow communist leaders; such were Ulbricht and Gomulka, to crush and contain the Czechoslovak reform movements. ...read more.

This treaty was signed by 35 countries in July 1975 in Helsinki, Finland. (Schlesinger 93) The dilemma was simple and Brezhnev's hypocrisy and double standard became visible and obvious. The treaty included human rights and freedom of speech/press clauses that Brezhnev ignored and so later on he had to face severe consequences to his detriment. Monitoring from Helsinki was commenced in Moscow, and later in Ukraine, Lithuania, Georgia, and Armenia. This was Brezhnev's unintended side effect hegemonistic and territorial greed. (Schlesinger 93) Leonid Brezhnev invaded Czechoslovakia with the aim to restore communism and counter any efforts of democratization and reform conducted by Alexander Dubcek, the head of Czechoslovakia since January 1968 and the coordinator of the Prague Spring. Brezhnev put all is power, military and political, to purge the communist parties around the world by assigning them obligations according to the Marxist Leninist authoritarian system. Brezhnev has succeeded to overthrow the government and restore the communist regime in Czechoslovakia, however failed to convince the bulk of a country, and that is the populace. And in the end the western public realized that no longer was communism the appealing and ideal system for developing countries. Leonid Brezhnev's territorial and influential ravenousness showed the world that his hypocrisy and two-faced character was inappropriate to lead one of the two superpowers in the bipolar world. ...read more.