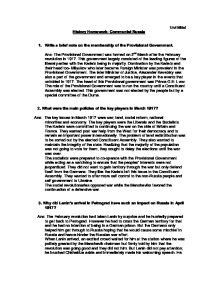 They considered Russia to be the weakest link and that war had acted as a catalyst to bring Europe to the brink of a socialist revolution. They knew that Germany would explode into revolution and once a revolution started, the proletariat of the advanced capitalists countries would come to the aid of the Russian proletariat and socialism could be built. 5. What problems did the provisional government face between April and August 1917? Ans: The provisional government faced four major problems which were the war, the land, the demands of the national minority and the deteriorating economic situation. The conduct of the war would determine the development of the revolution. When it became clear that Milyukov, Minister of War, not only wanted to defend Russia, but also try and make territorial gains from the victory of the Allies, particularly Constantinople, the Socialists in the Soviet were enraged as they were committed to a defensive war. Milyukov was forced into resignation, and the provisional government was in crisis. The peasants were hungry for land and the collapse of central authority meant that no one would be able to stop them from taking it. However they wanted government approval to make their actions legitimate. ...read more.

Armed groups marched in the streets, and other forces were then used to calm the armed soldiers that had arrived in Petrograd demanding the Soviet to take power. The Soviet leaders were seized and caught but managed to escape. 8. To what extent the Kornilov's affair was responsible for the October Revolution of 1917? Ans: Undoubtedly, handing the post of the Supreme Commander of Russian forces to Kornilov was a mistake as he had his own aims and wanted to crush the radical socialists and restore the old authority in Petrograd. When Kerensky noticed what was happening, he panicked and called on the Soviet for help. Though a few of the middle class people would have accepted Kornilov's methods, the others were terrified as it meant the return of old order and the loss of the gains of the Revolution. Everyone in Petrograd was alarmed and the Bolsheviks organized protection of the city using soldiers, workers and sailors. Kerensky was ready to supply weapons to the secret Bolshevik Red Guard. The result of this was that the people lost their trust in the Liberals and Kerensky's reputation was damaged. The workers and soldiers displayed frustration against the Liberals and ruling party and the support of the people now favoured the Bolsheviks. This Kornilov affair hence can be concluded to have a great effect and responsibility for the Revolution of 1917. ...read more.