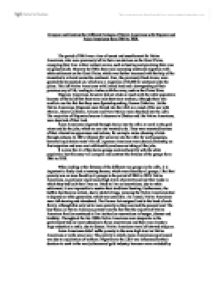 Compare and Contrast the Different Fortunes of Native Americans with Hispanic and Asian Americans from 1865 to 1929. The period of 1865 was a time of unrest and unsettlement for Native Americans, who were previously left to their own devices on the Great Plains, occupying their time in their cultural norms, such as hunting and practising their own religious beliefs. However by 1865, there was increasing westward migration with white settlement on the Great Plains, which was further increased with the help of the transatlantic railroad across the continent. Also, the previously freed slaves, were granted the homestead act, which saw a migration of 20,000 to westward onto the plains. This left Native Americans with limited land and a downgrading of their previous way of life, leading to clashes with the army, such as the Plains Wars. Hispanic Americans, however did not clash so much with the white population because of the belief that they were only short term workers, although there was conflict over the fact that they were Spanish speaking, Roman Catholics. Unlike Native Americans, Hispanics were forced into the USA as a result of the war with Mexico, where California, Arizona and New Mexico were absorbed into the USA. The majorities of Hispanics became Labourers in Ghettos and like Native Americans, were deprived of their land. ...read more.

And we can see that Native Americans suffered the most poverty, which was continual throughout the period, as their whole way of life became corrupt, including their methods of hunting and making money. Another issue, implemented by the US government, which widely affected all groups from 1865 to 1920, is segregation. 1877 saw the issuing of the Dawes Act, where Native American's land was divided up into reservations. This segregated Asian Americans from white society and encouraged private ownership. The difference, however, between Native American segregation and the other race groups is that they were previously isolated from whites and didn't care to be integrated into white society. A further difference is that the other groups' segregation focuses on isolation of the groups socially, for example in schools. Whereas Native American segregation focused on segregating them based on their cultural values, for example land ownership. Native Americans were actually encouraged to integrate into white schooling, as an attempt to downgrade their values. Segregation was a well-known existence to the Asian Americans where they were excluded in the industrial workforce and received only the unwanted jobs. Furthermore, the Chinese were segregated into their ghettos of the city - China town, which limited integration into white society. Hispanic Americans, on the other hand, experienced segregation based on de facto separation in schools and public entertainment, such as cinemas and swimming pools, and like Asian Americans, were segregated from whites into ghettos. ...read more.

This broke the promise of rights of citizenship and free migration. A continual factor for Asian Americans was the vetoing of exclusion bills, which would have resulted in false hopes, and then increasing exclusion, cutting off the hopes. This was seen where Chinese Exclusion was extended and then vetoed. The turning point in 1924 was when Asian Immigration was completely banned, which went against the promise of citizenship completely. The Dawes Act granted Native Americans reservation lands which they could use to become farmers, however, these hopes were broken as the reservation lands weren't set up for years after the act. Furthermore, whites got the best of the land, leaving the Native Americans as poor as they already were. Like, Hispanic Americans, Asian Americans migrated into the USA, however due to different reasons. Thje Hispanics were forced to migrate as a result of the war with Mexico and the Asians moved due to employment seeking. However, both groups ended up resented by the American population and the Asians were banned from entering by 1924. Overall I feel that the fortunes of Native Americans, Hispanic Americans and Asian Americans were all down to racial predudice, discrimination and poverty. These issues continued throughout the period and unlike African Americans, these groups didn't have any political activists who could gain rights. The NIA failed in it's attempts to gain economic improvements and the Hispanics didn't have any speakers. By Caroline Sims ...read more.