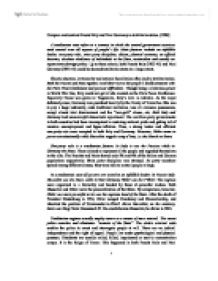 Compare and contrast Fascist Italy and Nazi Germany as totalitarian states. (1996) A totalitarian state refers to a country in which the central government exercises total control over all aspects of people's life. Main features include an infallible leader, one-party rule, strict party discipline, elitism, planned economy, an official doctrine, absolute obedience of individuals to the State, nationalism and usually an expansionist foreign policy. Up to these criteria, both Fascist Italy (1922-43) and Nazi Germany (1933-45) could be deemed totalitarian states to a large extent. Chaotic situation, irrationality and national humiliation often lead to totalitarianism. Both the Fascist and Nazi regimes owed their rise to the people's disillusionment with the Paris Peace Settlement and postwar difficulties. Though being a victorious power in World War One, Italy could not get all she wanted on the Paris Peace Conference. Especially Fiume was given to Yugoslavia, Italy's rival in Adriatic. As the major defeated power, Germany was punished heavily by the Treaty of Versailles. She was to pay a huge indemnity, cede traditional territories, lose all overseas possessions, accept almost total disarmament and the "war-guilt" clause, etc. Both Italy and Germany had unsuccessful democratic experiment. The coalition party governments in both countries had been incompetent in restoring national pride and getting rid of massive unemployment and hyper-inflation. Thus, a strong leader and efficient one-party rule were accepted in both Italy and Germany. However, Hitler came to power constitutionally while Mussolini staged a coup d'etat, i.e. the March on Rome. ...read more.

In 1933-45 about two-third of European Jews were killed. Nazism was supreme in Germany. There was no religious tolerance. All kinds of religions and churches were suppressed. Priests and pastors were exiled or sent to concentration camps. There was only Hitler's Reich Church. Pope Pius XI named him the "enemy of Christ and his Church". By contrast, Mussolini kept a peaceful and amicable relation with the Roman Catholic Church though he disliked Christianity. By the Lateran Treaty of 1929 Mussolini recognized Catholicism as the state religion and made the Vatican City independent. Again this showed that Mussolini was not the supreme in Italy. In a totalitarian state all the means of communication such as radio and newspapers are controlled by the government to glorify the State, attack the enemies and call on people to work for a noble future. Mass rallies are used to uplift people's spirit. Frequent meetings for the masses on-the-job or in local organizations let party members exhort the people. Education is also manipulated in the form of indoctrination. In both Fascist Italy and Nazi Germany substantial examples included revision of school curricula, inclusion of nationalism and official doctrines in textbooks, and forced allegiance to the State on teachers. In short, the State shaped people's thoughts and minds. In Germany, for example, Goebbel, Minister of Propaganda, was very good at tasks of Nazi indoctrination. ...read more.

There was rigid control of foreign exchange, allocation of raw materials, guided investment and disciplined regulations of labour, wages, farming, prices and profit. Nazis even ran some enterprises. Production was at Nazi disposal. Industries and agriculture were subsidized. Farmers' holdings were protected. Full employment was achieved by 1936 with such a planned economy, in addition to the massive rearmament and public works programmes. Workers even enjoyed such fringe benefits as subsidized holidays, cheap theatre and rent control, etc. Yet Alan Bullock argues that full employment and prosperity could not last unless Germany expanded. A totalitarian state often adopts an expansionist foreign policy to seek national glory. Both Fascist Italy and Nazi Germany built up formidable armaments. Before 1935 Mussolini posed to be a pacifist and anti-Nazi. Seeing the fragility of the Stresa Front, Mussolini joined Hitler subsequently in territorial expansion. There saw Italian invasion of Abyssinia and Albania. Mussolini's foreign policy was inconsistent and opportunistic. Hitler never hid his territorial ambitions. He aimed at complete reversal of the Treaty of Versailles, seeking "living space" for Germany and satisfying the popular nostalgic hankering of the return of German greatness. Hitler carried out conscription and full-scale rearmament, annexed Austria, Czechoslovakia and invaded Poland. They even formed the Axis and withdrew from the League of Nations. Both were accountable for the outbreak of World War Two. In a nutshell, we may say that both Fascist Italy and Nazi Germany were totalitarian states though there were some differences. 1 1 ...read more.