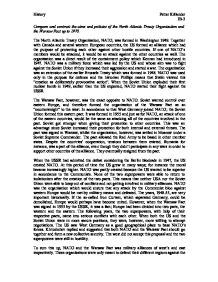 Compare and contrast the aims and policies of the North AtlanticTreaty Organisation and the WarsawPact up to 1970.

Compare and contrast the aims and policies of the North Atlantic Treaty Organisation and the Warsaw Pact up to 1970. The North Atlantic Treaty Organization, NATO, was formed in Washington 1949. Together with Canada and several western European countries, the US formed an alliance which had the purpose of protecting each other against other hostile countries. If one of NATO's members would be attacked, it would be an attack against the other countries as well. The organization was a direct result of the containment policy which Kennan had introduced in 1947. NATO was a military force which was led by the US and whose aim was to fight against the Soviet Union if they increased their aggression and started a war. ...read more.

Soviet got stronger when giving their protection to other countries. This was an advantage since Soviet increased their protection for both internal and external threats. The pact was signed in Warsaw, whilst the organisation, however, was settled in Moscow under a Soviet Supreme Commander. The pact allowed the Red Army to be based in other member states. Despite the countries' cooperation, tensions between them existed. Rumania for instance, was a part of the alliance, even though they didn't participate in any wars in order to support other countries of the alliance. They eventually resigned from the pact. When the USSR had admitted the defeat considering the Berlin blockade in 1947, the US created NATO. At this period of time the US grew in many ways; for instance the moral became increasingly higher. ...read more.

When both the US and the Soviet Union were in more secure positions, they were, however, more willing to attempt negotiations. The US saw West Germany as a good geographical place to base NATO's forces. Khrushchev replied and suggested that both NATO and the Warsaw Pact should go together and form a new collective security. The west did not accept this proposal and the two superpowers were still in hostility. To sum this up, NATO and the Warsaw Pact was military alliances of west's and east respectively. These organisations were only meant to defend their different regions against the opponents. The Warsaw Pact broke up when the Berlin Wall was taken away. NATO is still, however, in use and many of the former members of the Warsaw Pact is nowadays members of the North Atlantic Treaty Organisation, NATO. History Petter Killander IB-2 ...read more.