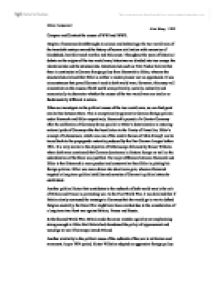 Compare and Contrast the causes of WWI and WWII.

Compare and Contrast the causes of WWI and WWII. Despite of numerous breakthroughs in science and technology, the two world wars of the twentieth century marred the history of human civilization with memories of bloodsheds, horrible trench warfare and Holocaust. Throughout the years of historical debate on the origins of the two world wars, historians are divided into two camps: the intentionalists and the structuralists. Intentionalists such as Fritz Fischer believe that there is continuity in German foreign policy from Bismarck to Hitler; whereas the structuralists claimed that Hitler is neither a master planner nor an opportunist. It was circumstances that paved German's road to both world wars. However, this essay will concentrate on the causes of both world wars politically, socially, culturally and economically to determine whether the causes of the two world wars are similar or fundamentally different in nature. When we investigate in the political causes of the two world wars, we can find great similarities between them. This is exceptionally apparent in German foreign policies under Bismarck and Hitler respectively. ...read more.

In the Second World War, Britain made the same mistake again by not emphasizing strong enough to Hitler that Britain had abandoned the policy of appeasement and would go to war if his troops invade Poland. Another similarity in the political cause of the outbreak of the war is militarism and armament. In pre-1914 period, Kaiser Wilhelm adopted an aggressive foreign policy. The Naval Law in 1898 was seen as an aggression against the supremacy of the Royal Navy. The arms race provoked by Kaiser Wilhelm fanned the flame of tension amongst many of the major states. This increased the international tension, which eventually led to the outbreak of the war. In Second World War, there is a strong undertone of rearmament even before Hitler became the Chancellor in 1933. The evidence is to be found in Mein Kampf and Hitler's second book, in which he envisaged that under his leadership Germany would restore national pride through reversing the Treaty of Versailles and rearmament. His step-by-step rearmament program alerted Britain and France in the Spanish Civil War when Hitler deployed his forces in supporting Franco's fascist force. ...read more.

The shortage of industrial raw materials was one of the major economic causes that justifies German's need for expansion. Some historians suggest that Germany was driven to war due to economic reasons. They believed that armament manufacturers such as Krupp or Vicker-Armstrong actually lobbied the government to wage war so that their can gain profit from the warfare. This argument has substantial support for partially leading to the outbreak of the Second World War since Krupp's was in close partnership with Hitler and the Nazi Party. The armaments manufacturer had funded Hitler in launching his election campaigns. In conclusion, there are many similarities between the causes of the First World War and Second World War. However, we can hardly find any similarities culturally and socially since there are major differences in the concept in the role of culture between autocracy and a single party state. In a single party state, the government sees culture and education as essential tools to instill the next generation with politically correct beliefs; whereas autocracy does not have an established system of cultural censorship. It relies largely on the loyalty of the people and the existing system of classes to generate common ideals. History Assignment Alvin Wong 12GY ...read more.