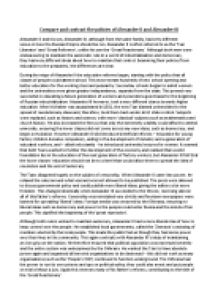 ﻿Compare and contrast the policies of Alexander II and Alexander III Alexander II and his son, Alexander III, although from the same family, had very different views on how the Russian Empire should be run. Alexander II is often referred to as the ?Tsar Liberator? and ?Great Reformer?, unlike his son the ?Great Reactionary?. Although both men were endeavouring to maintain the autocratic rule in a world of industrialisation and democracy, they had very different ideas about how to maintain that control. Examining their policies from education to the peasantry, the differences are clear. During the reign of Alexander II the education reforms began, starting with the policy that all classes of people could attend school. This move meant hundreds of new school opening and better education for the working class and peasantry. Secondary schools began to admit women and the universities were given greater independence, separate from the state. This proved very successful in educating a future generation of workers and provided a good basis for the beginning of Russian industrialisation. ...read more.

When Alexander II came into power, he relaxed the rules around what was and was not allowed to be published. The press were allowed to discuss government policy and could publish more liberal ideas, giving the editors a lot more freedom. This changed drastically when Alexander III succeeded to the throne, reversing almost all of this father?s reforms. Censorship was reinstated very strictly and fourteen newspapers were banned for spreading ?liberal? ideas. Foreign media was censored by the Okhrana, ensuring no liberal ideas such as democracy and power to the people could enter Russia and the minds of her people. This signified the beginning of the ?great repression?. Although both rulers wished to maintain autocracy, Alexander II had a more liberal idea of how to keep control over the people. He established local governments, called the ?Zemstva? consisting of members elected by the local people. This made the public feel as though they had some power over their lives in the community. This again contrasts with Alexander III?s ideas of maintaining an iron grip on the nation. ...read more.

Laws were introduced which reduced the tax burden on peasants and a Peasant Land Bank was established ? allowing the lower class to loan pieces of land to farm, making them more productive. Foreign loans from Britain and France ensured the continuation of Russia?s economic development. Alexander II allowed linguistic diversity across the Empire. The idea of Russification was entirely Alexander III?s. He intended to unite Russia under one language and culture but ended up almost contradicting himself. Organised pogroms ? attacks on Jews ? which had been approved by the government were frequent occurrences during the reign of Alexander III, undermining his idea of a united Empire. The policy that everyone had to speak Russian and that all documents had to be written in Russian was not well thought through. To begin with, it caused many problems for non native speakers and caused resentment from many areas. This all lead to many people leaving Russia and seeking sanctuary in neighbouring countries. Alexander II?s reforms, by contrast, seem much less extreme and more liberal, with the idea that if he could keep the public happier then he would be able to maintain control of the growing population. ...read more.