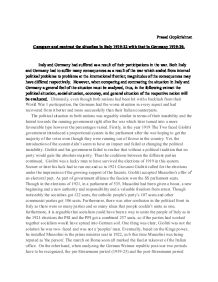 Prasad Gopikrishnan Compare and contrast the situation in Italy 1919-22 with that in Germany 1919-29. Italy and Germany had suffered as a result of their participations in the war. Both Italy and Germany had to suffer many consequences as a result of the war which scaled from internal political problems to problems at the international frontier; magnitudes of the consequences may have differed respectively. However, when comparing and contrasting the situation in Italy and Germany a general feel of the situation must be analyzed, thus, in the following extract the political situation, social situation, economy, and general situation of the respective nation will be evaluated. Ultimately, even though both nations had been hit with s backlash from their World War 1 participation, the Germans had the worse situation in every aspect and had recovered from it better and more successfully than their Italian counterparts. The political situation in both nations was arguably similar in terms of their instability and the hatred towards the running government right after the war which later turned into a more favourable type however the percentages varied. Firstly, in the year 1919 The Two faced Giolitti government introduced a proportional system in the parliament after the war hoping to get the majority of the votes even though they were running out of favour in the country. Yet, the introduction of the system didn't seem to have an impact and failed at changing the political instability. Giolitti and his government failed to realize that without a political tradition that no party would gain the absolute majority. Thus the coalitions between the different parties continued. Giolitti was a lucky man to have survived the elections of 1919 in this system. Sooner or later his luck had to run out and so in 1921 Giovanni Giolitti called for the elections under the impression of the growing support of the fascists. Giolitti accepted Mussolini's offer of an electoral pact. ...read more.

The Germans were in need of more money; money that was beyond their reach, eventually they resulted to printing more money which they hoped would pay for what they wanted and result in not having to pay for the reparations as their currency was now worthless. The German hope for settling everything else within their country was a dream comes true even though the middle class were upset, but, the Germans were not excused from paying the reparations. As a result of these financial problems Gustav Stresemann and Hjalmar Schacht (finance minister) replaced Ebert. Under Stresemann the Germans successfully agreed to Locarno which would secure German boundaries, and then signed the Dawes Plan and the Young's Plan with the USA, whereby the Americans would invest and loan money to Germany so that reparations could be paid; which meant that all money owed to other countries would be paid in turn. The Young's Plan on the other hand was an American plan as well whereby the Germans would be given 2 billion Pounds to pay for the reparations and it would eventually be paid back over a 59 year period. This provided economic prosperity and growth which wasn't seen in Italy at this time, international intervention and a change in leadership had helped the Germans achieve more in this field in comparison to the Italians who were better off to start in comparison to the Germans. It was mentioned that the Italians faced an inflation of about 560%, although it must be remembered that the German inflation surpassed this over the years, in addition to this the German inflation had begun earlier than the Italian inflation in the year 1923, the Stresemann's ability to change the currency to Rentenmarks, and then Gold Marks to revive the German economy was a risk, yet it paid off, the Italians on the other hand seemed to have taken a conservative measure towards their economy or arguably nothing at all. ...read more.

The Economy was getting better, the government was steady and more people were being employed as more jobs were created. The people of Germany also faced further problems despite the mentioned as trading couldn't occur and were limited with the resources they had as they were experienced an embargo, also the cold winters during which time had caused many fatalities and as a result affected many of the homeless who faced the adverse affects of the hyperinflation. Moreover, what the Germans faced that the Italians didn't have to encounter was the Ruhr crises of 1923. The Italians did not have to deal with another nation in a situation whereby the public were being affected as jobs were lost; people were injured in small fights against the French, and not producing goods from the industrial region. In conclusion it can be seen how much more the Germans had to face in relation to that of which the Italians faced to eventually obtain success. In conclusion, in the extract above the nature of events after the war has been outlined, it is noticeable that the Germans had faced events over the time period whereby their situation after the war had been worse as the magnitude of the event they encountered was comparable despite the similarity in nature, thus, the Germans has done better than the Italians. One may ask what that means. Well it simply means that the Germans had to work harder than the Italians to live through inflation higher than 560%, to see a glimmer of the Golden Age of the Weimar, to unlock the impositions of the Treaty of Versailles peacefully through an international treaty otherwise known as Locarno and lastly to have even lived through 5 stable years under Gustav Stresemann with high expectations. Many historians today do support this theory as in-depth analysis shows that if the governing body of post-war Italy had been in charge of Germany, instead of Ebert and particularly Stresemann, the achievements of Germany would not have been seen. The fruit wouldn't have been seen, the apple would not have been eaten. ...read more.