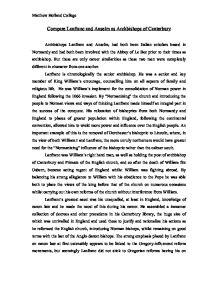 Compare Lanfranc and Anselm as Archbishops of Canterbury.

Compare Lanfranc and Anselm as Archbishops of Canterbury Archbishops Lanfranc and Anselm, had both been Italian scholars based in Normandy and had both been involved with the Abbey of Le Bec prior to their times as archbishop. But these are only career similarities as these two men were completely different in character from one another. Lanfranc is chronologically the senior archbishop. He was a senior and key member of King William's entourage, counselling him on all aspects of family and religious life. He was William's implement for the consolidation of Norman power in England following the 1066 invasion. By "Normanizing" the church and introducing the people to Norman views and ways of thinking Lanfranc made himself an integral part in the success of the conquest. His relocation of bishoprics from both Normandy and England to places of greater population within England, following the continental convention, allowed him to wield more power and influence over the English people. An important example of this is the removal of Dorchester's bishopric to Lincoln, where, in the view of both William I and Lanfranc, the more unruly northerners would have greater need for the "Normanizing" influence of the bishopric rather than the calmer south. Lanfranc was William's right hand man, as well as holding the post of archbishop of Canterbury and Primate of the English church, and so after the death of William fitz Osbern, became acting regent of England whilst William was fighting abroad. ...read more.

His tenure as archbishop is best shown by another idea from Eadmer in his great work, The Life of Anselm, of an old and feeble ewe yoked to a powerful and uncontrollable bull. Anselm (the Ewe) is rendered helpless by the turmoil of the bull, William Rufus and this seems to be the story of his reign - struggling weakly against an overbearing power. In contrast with this, Lanfranc had a close bond with William I and was one of the few people who actually influenced him. Rufus only appointed Anselm as archbishop of Canterbury on what he believed to be was his deathbed. This was because there had been five years without an archbishop, where Rufus had diverted the revenues into his own treasury and now, seemingly about to die, he had believed the cause of his illness was this outrage. Perhaps this was true, as it turned out that the bed was not his last and he survived for a lengthy time after. So Anselm was an unwillingly appointee to the role of archbishop, being plucked from his dedicated, scholastic life and having authority and power thrust upon him. He was seen though as a suitable candidate for the role on account of his thirty years as prior, then abbot of the monastery of Le Bec and also his brilliant reputation as an authority on ecclesiastical matters. ...read more.

he also realised the idea that a priest should be chaste to deliver the Eucharist as Christ was born of a virgin, and thus he placed a ban upon clerical marriages. On a more practical level Anselm also had problems with churchmen's families because the children might expect to inherit their father's position and to draw wealth from the church to be supported, leading to hereditary positions within the church, inviting stability and continuity into the church, but also bringing complacency and incompetence with it. To conclude, there are two main differences between Lanfranc and Anselm as Archbishops of Canterbury. Anselm, by training a classicist, contrasted greatly in style with Lanfranc who was originally a lawyer and later a teacher. Anselm believed in great precision and clarity of written words. He preferred to ponder and reflect rather than just use the great Library, which Lanfranc had assembled at Canterbury. The Anselm archbishopric contained several periods of dispute and exile, as he did not manage to achieve the delicate balance between obedience to the Pope in Rome and allegiance to the King of England. Anselm was also a major figure in the Investiture Controversy. Lanfranc was a trusted counsellor of William and was largely responsible for the peaceful co-existence of Church and State. Although a firm supporter of Papal sovereignty, Lanfranc supported the relative independence of the English Church at the same time protecting it from the 'Royal and Secular' influence. Matthew Holland College ...read more.