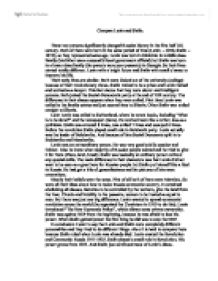 Compare Lenin and Stalin. These two persons significantly changed Russian history in the first half XX century. Both of them were born in the same period of time (Lenin - 1870, Stalin - 1879), so they represented same age. Lenin was born in Simbirsk in middle class family (his father was a successful local government official) but Stalin was born in a lower class family (his parents were poor peasants) in Georgia. So their lives started totally different. Lenin with a bright future and Stalin with small chance to improve his life. Their early lives are similar. Both were kicked out of the university (college) ...read more.

and the newspaper (Iskra). He worked more like a writer, less as a politician. Stalin was arrested 8 times, was exiled 7 times and escaped 6 times. Before the revolution Stalin played small role in Bolshevik party. Lenin actually was the leader of Bolsheviks. And because of him Social Democrats split in to Bolsheviks and Mensheviks. Lenin was an extraordinary person. He was very good public speaker and thinker. Also he knew what majority of Russian people wanted and he tried to give it for them (Piece, land, bread). Stalin was basically an ordinary person without any special skills. The main difference in their characters was that Lenin did not want to be seen as a great hero for Russian people but Stalin put himself like a God in Russia. ...read more.

Lenin wanted to spread communist revolution across the world (he organized the Comintern in 1919 to do this). Lenin introduced "The New Economic Policy", which allows some private ownership. Stalin was against NEP from the beginning, because he was afraid to lose his power. When Stalin gained power the first thing he did was to stop the NEP. In conclusion I want to say that Lenin and Stalin were completely different personalities and they tired to do different things. Also it is hard to compare them because Stalin ruled when Lenin was already died. Lenin created the Revolution and Communist Russia 1917-1923. Stalin played a small role in Revolution. His power grows from 1923. And Stalin just continued most of Lenin's ideas. ...read more.