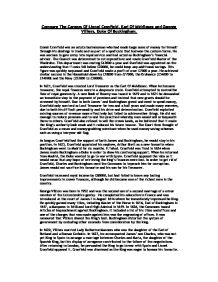 Compare The Careers Of Lionel Cranfield, Earl Of Middlesex and George Villiers, Duke Of Buckingham.

Compare The Careers Of Lionel Cranfield, Earl Of Middlesex and George Villiers, Duke Of Buckingham. Lionel Cranfield was an astute businessman who had made large sums of money for himself through his dealings in trade and as part of a syndicate that had won the custom forms. He was anxious to gain entry into royal service and had acted as Buckingham's financial adviser. The Council was determined to cut expenditure and made Cranfield Master of the Wardrobe. This department was costing �42000 a year and Cranfield was appointed on the understanding that if costs fell below �20000, he could keep any additional savings. This figure was quickly surpassed and Cranfield made a profit of over �7000 a year. He achieved similar success in the Household down by �18000 from �77000, the Ordnance (�34000 to �14000) and the Navy (�53000 to �30000). In 1621, Cranfield was created Lord Treasurer as the Earl Of Middlesex. When he became treasurer, the royal finances were in a desperate state. ...read more.

Cranfield increased royal income by �80000, but had failed to leave any lasting improvements in crown finances, although he did become one of the richest men in the country. George Villiers was born in 1952 and was the second son of a second marriage of a minor member of the Leicestershire gentry. He completed his education in France and was introduced at the court of James I in August 1614 where he immediately impressed he King. He quickly gained many titles, including Master of the Horse in 1616, Earl of Buckingham in 1617, a Marquess in 1618 and Lord High Admiral in 1619. In 1626, the Commons issued Articles of Impeachment against Buckingham. It included a list of his titles and offices and one of the charges that was made against him was the engrossing of offices. It was rumoured that Villiers shared the King's bed. Buckingham distorted the system of government by excluding other counsels from consideration by the king. In 1620, Villiers married Lady Katherine Manners who was the daughter of the Earl of Rutland and a Roman Catholic. ...read more.

On August 27th, Buckingham went to Portsmouth in order to arrange another expedition to La Rochelle, but on August 22nd, a naval lieutenant, John Felton, stabbed him to death. This caused there to be much rejoicing in the land. He was 36 years of age and was buried in Westminster Abbey, near to the tomb of King James. His tomb bears the inscription, "the Enigma of the World". In general, neither Cranfield nor Buckingham had a particularly positive or long lasting effect on the state of the country. Cranfield did manage to save the country money and increase royal income, as well as becoming one of the richest men in the country, and Buckingham was responsible for several embarrassing situations such as the defeat at the port of La Rochelle and most of the country was happy when he was stabbed to death. Neither of them had a very good or productive time whilst they were in power. Cranfield had the better career as he got out of it alive and made the country money, but Buckingham gained many titles and responsibilities. Overall, Cranfield was the better man as he did not end up being hated by the country. ...read more.