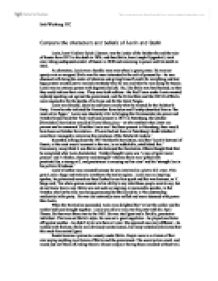 Compare the characters and beliefs of Lenin and Stalin

Compare the characters and beliefs of Lenin and Stalin Lenin, born Vladimir Ilyich Ulyanov, was the leader of the Bolsheviks and the ruler of Russia from 1917 to his death in 1924, and then Stalin, born Joseph Djugashvili, took over, taking undisputed control of Russia in 1928 and remaining in power until his death in 1953. As characters, Lenin was a humble man even when in great power. He was not openly vain or arrogant. Stalin was far more interested in the cult of personality - he was obsessed with being the centre of attention and giving himself credit for everything and had huge posters erected just to remind everybody who he was and what he was doing for Russia. Lenin was an extreme person with dogmatic beliefs. He, like Stalin was hard hearted, so that they could achieve their aims. They were both ruthless - the Red Terror under Lenin arrested anybody speaking out against the government, and the Police State and the NKVD of Stalin were responsible for the deaths of millions and for the Great Purges. ...read more.

He was also outwardly more selfish and more obsessed with power than Lenin. When the Revolution succeeded, Lenin was delighted that 'at last the soldier and the worker had been brought together. Lenin was able to win over his party with his April Theses. He then won them over to the NEP. He was intelligent and a flexible, persuasive individual. That was not Stalin's style. He was not a great negotiator - he played one factor off against another - he didn't try to win them all over. His approach was very different - he worked with factions. Stalin was obviously unintellectual, but many mistakenly believed that this made him unintelligent. Russia became a paranoiac country under Stalin. People were in a climate of fear over saying anything in criticism of Stalin and the government. The secret police could, and would just cart them off, taking them to labour camps or having them executed without trial. Stalin was quiet and strong, dangerous and sinister. He kept albums of the people whom he had had executed. There were also the show trials where people were vilified for things that they hadn't come close to doing e.g. ...read more.

Conversely, many think it was Stalin who betrayed the Revolution. Others though think that he completed what Lenin had started. Trotsky thought Lenin was 'a man of great moral passion' and 'a thinker, observer and strategist' whereas Stalin was 'gifted with practicability, a strong will, and persistence in carrying out his aims' and his 'strength lies in his political blindness.' Stalin was found by many to be a tyrant. His beliefs are not always entirely obvious. Lenin stuck to more to Communist principles and was not such a dictator. His switches from Communism to the dictatorship of War Communism and the capitalist ways of the NEP show he was flexible and would change policies that didn't work. War Communism was for an emergency - the Civil War - the NEP only a temporary measure. If he had lived longer it seems as though he would have returned to the fundamental ideas of Communism. Stalin drifted from left to right in order to get into power and then reaffirmed Communism, in the forms of Industrialization and Collectivisation, bringing it back with a vengeance. ?? ?? ?? ?? Josh Weinberg 11C ...read more.