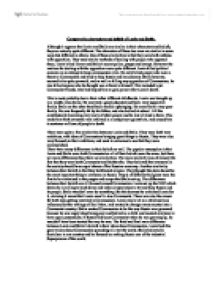 Compare the characters and beliefs of Lenin and Stalin. Although it appears that Lenin and Stalin are similar in their characters and b eliefs, they are actually quite different. The characters of these two men are similar in some ways but different in others. One of these similarities is that they were both ruthless with opposition. They used similar methods of dealing with people who opposed them, Lenin's Red Terror and Stalin's secret police, pu rges and camps. However the motives for dealing with the opposition were quite different. Lenin killed political enemies in an attempt to keep communism alive . He only killed people who were a threat to Communism and tried to help Russia and its economy. Stalin however, seemed to be quite paranoid, and as well as k illing any opposition of Communism, he also killed anyone who he thought was a threat to himself. This included loyal Communist friends, who had helped him to gain power after Lenin's death. This is most probably due to their rather different childhoods. Lenin was broug ht up in a middle class home. He received a good educated and had a very suppor tive family. ...read more.

Stalin wanted Communism to be the way Russia was governed because he was angry about being poor and bullied as a child and wanted everyone to hav e equal possessions. If Russia had been Communist when he was growing up, he wo uldn't have been treated the way he was. The third and final main difference be tween Lenin and Stalin's beliefs is their ideas about Communism. Lenin had this great vision about Communism spreading all over the world. Stalin believed in Socialism in one country and he focused on making Russia one of the industrial Superpowers of the world. The popular assumption is that Lenin and Stalin were both Communist so all of their beliefs were the same. This is incorrect because there were more differe nces between their beliefs than there were similarities. Lenin and Stalin were two very different men and, although Stalin took over when Lenin died, he had h is own ideas and very different methods of making them happen. Coursework Who Was More Significant in Russian history, Lenin or Stalin? Lenin and Stalin both had a huge impact on Russia and the Russian way of life. Lenin led the Revolution, which was what introduced the people of Russia to the idea of Communism. ...read more.

Lenin changed the r ules of education so that, instead of every 1 in 4 peasants being able to read and write, he gave everyone between 8 and 50 years old the opportunity to go to school. Stalin then improved these opportunities by increasing the standards i n schools and providing better chances for peasants to go to school. One of the biggest problems that Lenin had to face was Russia's economy. He so lved this by setting up the NEP. This was very unpopular with other Communists, but it solved the economy problems. Stalin didn't have to rebuild the Russian economy, but he did improve it by a huge amount, by setting up Collectivisation and the 5 year plans. All this lead to Russia to becoming a major industrial s uperpower. This was probably Stalin's greatest achievement. This is possibly mo re significant than the Russian revolution, but if Lenin hadn't brought Communi sm to Russia, Stalin would never have came to power. After comparing Lenin and Stalin's accomplishments I have come to the conclusio n that Lenin had the greatest impact on Russia and its people, as it was he who bought communism to Russia in the first place, and almost everything that Stal in did was already set up by Lenin. ...read more.