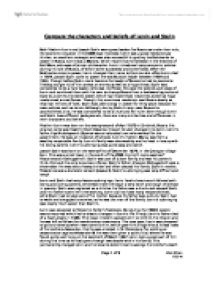 Compare the characters and beliefs of Lenin and Stalin Both Vladimir Lenin and Joseph Stalin were great leaders for Russia as under their rule, the economic situation in the USSR was improved. Lenin was a great revolutionary thinker, an excellent strategist and was also successful In guiding the Bolsheviks to power in Russia. Lenin was a Marxist, which meant that he believed in the theories of Karl Marx, who was a German philosopher. Lenin introduced many economic policies during his rule of Russia, of which some succeeded and some failed. After the Bolsheviks came to power, Lenin changed their name to Communists. After Lenin died in 1924, Joseph Stalin came to power. He was Russia's leader between 1929 and 1953. Though before Stalin could become the leader of Russia he had to overcome Trotsky and get rid of him as was an enemy as well as a huge threat. Stalin was considered to be a hard leader, who was ironfisted. He used the policies and ideas of Lenin and combined them with his own to change Russia from a backward agricultural state to a communist world power, which had modernised industries as well as huge modernised armed forces. Though, this enormous revolution cost Russia dearly as they lost millions of lives. Stalin was able to stay in power for thirty years because he uses policies such as terror. Although, during Stalin's reign over Russia he accomplished a lot, he was considered to be a cruel and evil ruler. Even though Lenin and Stalin have different backgrounds, there are many similarities and differences in their characters and beliefs. Vladimir Lenin was born on the twenty-second of April 1870 in Simbrisk, Russia. His original name was Vladimir Ilyich Ulyanov, though he later changed it to Lenin. Lenin's father, Ilya Nickolayevich Ulyanov was an educated man who worked for the government. He was an inspector of schools. ...read more.

He was intolerable to most people. He was unforgivable: "The terrible thing about Stalin was that if you made a mistake with him, it was like mishandling a detonator - it was the last mistake of your life" According to Alexander Solzhenitsyn (Coursework Booklet) After the death of Stalin's wife, Stalin became a very stonehearted man: "This creature softened my heart of stone. She died and with her my last warm feelings for people". Robert C. Tucker - Stalin as Revolutionary (Coursework Booklet) Both Lenin and Stalin were very unforgivable men. Though in extreme cases, Stalin would be much harsher on people than Lenin. Both Stalin and Lenin dedicated there lives to Marxism. In appearance terms, Lenin was considered better looking than Stalin. In public speaking it is obvious that Lenin is much better than Stalin. As Stalin's speeches are dry and boring while Lenin's are full of life, inspiring and his speeches made the crowd get up and listen. Stalin had a very stubborn characteristic about him, meaning once Stalin had made up his mind about something, it was impossible to change his mind: "Once he made up his mind on a subject, nothing could shake him" Memories of Simon Vereschak (Coursework Booklet) This was unlike Lenin, who would listen to others opinions even if they opposed to the views of his own. Stalin like Lenin also made his work his life. You could not stop him from getting the job done. An example is the five year plans in which he was able to reach nearly impossible targets. Stalin never rethought his actions showing the self-confidence that he has. Stalin made his party with people who only supported his views. Anyone who he mistrusted or became suspicious of would be either murdered or dismissed. Stalin established a party which would follow all of his commands; therefore he did not have to worry about his attitude towards his colleagues. ...read more.

All pieces of art had to be passes by the state before it could be shown. You could say that both leaders encouraged the Cult of personality, but it is obvious that Stalin exaggerated it. Stalin had wanted to have cults in every place of Russia, by using propaganda. He wanted to portray himself as god and did this by using propaganda such as statues of him, paintings of him and parades celebrating him. While Lenin was much more modest: "Lenin, personally a modest man, had always resisted adulation of his person. When he encountered the term Leninism he rejected it, since he held himself to be a Marxist". J. RoBottom - Modern Russia Lenin, unlike Stalin, tried to improve the conditions for the peasants. Unlike Stalin, who did not consider what the effects would be on the peasants because of his actions. Lenin made the N.E.P. which allowed the peasants to make profits with their surplus crops. They were not able to do this before, this made the peasants happy. Though, Stalin made life for the peasants very hard by introducing the five year plans and collectivisation. The five year plans made the peasants work very hard and in the end they would not be rewarded for their work. Collectivisation made peasants very unhappy because they stopped making profits and only worked for the government. In conclusion, both leaders had the same intention to make Russia more prosperous and transform it into a major world power. Both Lenin and Stalin were great leaders that had huge impacts on Russia. They both permanently changed the USSR. Both men were dedicated to their country and to communism. Stalin did not have the intellect of Lenin, but he had an iron determination which made him a great leader. Stalin was more violent than Lenin but this made Russia very strong. Stalin continued Lenin's reign and combined his ideas with Lenin's to make Russia into the strong country that it is today. ?? ?? ?? ?? Page 1 of 8 Zain Khan Y11-4 ...read more.