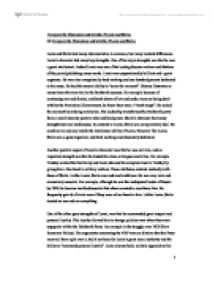 Compare the Characters and beliefs of Lenin and Stalin. Q1.Compare the Characters and beliefs of Lenin and Stalin. Lenin and Stalin had many characteristics in common, but many marked differences. Lenin's character had many key strengths. One of his major strengths was that he was a great intellectual. Indeed Lenin was one of the leading Russian writers and thinkers of the period publishing many works. Lenin was unquestionably brilliant and a great organiser. He was also exceptionally hard working and one hundred percent dedicated to his cause. He had this natural ability to "seize the moment". History illustrates so many times this was vital to the Bolshevik success. For example because of continuing war and famine, and break down of law and order, were not being dealt with by the Provisional Government, he knew they were a "weak target". He seized the moment by ordering revolution. His leadership transformed the Bolshevik party from a small/minority party to take and hold power. Stalin's character had many strengths but also weaknesses. In contrast to Lenin, Stalin was comparatively dull. He could not in any way match the intellectual ability of Lenin. However like Lenin, Stalin was a good organizer, and hard working and absolutely dedicated. Another positive aspect of Lenin's character was that he was not vain, and an important strength was that he trusted his close colleagues and allies. For example Trotsky created the Red Army and Lenin showed his complete trust in Trotsky by giving him a free hand in military matters. These attributes contrast markedly with those of Stalin. Unlike Lenin, Stalin was rude and ambitious. He was very vain and excessively neurotic. For example, although he was the undisputed leader of Russia by 1930, he became terrified/neurotic that others wanted to overthrow him. He frequently got rid of rivals even if they were of no threat to him. Unlike Lenin, Stalin trusted no one and ran everything. ...read more.

In order to arouse the pupil's interest and sense of responsibility, they were often allowed to organize the school routine themselves. At the worst, this lead to teachers struggling for survival among unruly pupils; but at the best it brought a spirit of friendliness and co-operation into the classroom. * Universities were opened to the intelligent child from a working-class family but closed to the child of a former factory manager or landowner. * Religion was permitted, but strongly discouraged, by Lenin's Communists. Many churches were turned into schools or warehouses and priests were placed in the lowest group of non-working citizens. In summary, although Lenin was in power for only a short period of time he had an immense influence on the lives of ordinary Russian citizens and on the nature of the society that would succeed him. He led Russia through revolution taking land from the Tsar and his followers and putting the means of industrial production into the hands of the workers. He succeeded in taking Russia out of the Great War, won the Civil War, and made sweeping social changes benefiting his people. However, the Civil War and Lenin's policy of War Communism created severe stress in the country at large, leading to revolts and riots, strikes and unimaginable human suffering. In addition, on the negative-side he also introduced measures to severely restrict people's freedom and introduced a repressive secret police. Despite these negative aspects, on balance I consider Lenin's contribution was overwhelming positive. "Lenin did more than any other political leader to change the face of the twentieth-century world. The creation of Soviet Russia and its survival were due to him"(AJP Taylor). Q3 Asses the impact that Stalin had on Russia, and the Russian people. Joseph Stalin had an enormous impact on Russia and the Russian people. He became leader after the death of Lenin. The NEP had made sure progress but more rapid growth was needed for the USSR to catch up with the West. ...read more.

For example Stalin had a huge impact on industry by implementing a series of Five-Year Plans. In under ten years, the USSR had almost doubled its industrial output-but the price was misery and low living standards for Soviet Workers. Hence although Lenin laid the foundations of communism, it could be argued Stalin improved upon them. Similarly Stalin had an enormous affect on the lives of Russian peasants and destroyed the traditional peasant way of life by forced Collectivisation. Perhaps his most infamous role in Russian life was his Purges and reign of Terror. The 'Great Terror' continued with varying degrees of intensity until the 1940's. It extended into all areas of Soviet life, claiming the lives of many millions of Soviet people, from generals and artists to ordinary factory workers. Stalin also was a central figure in the defeat of Nazi Germany and emerged from the war with huge domestic and international prestige. He dominated the politics of Eastern Europe after the 2nd World War. Later in life he became obsessed with American Economic and Military strength. This led to the Cold War and he attempted to match the military strength of the United States but he did not possess the economy to achieve this. In doing so he laid the foundation for the subsequent destruction of the Soviet Union economy and the communist political system. In summary, Lenin was the more successful Revolutionary Figure/Leader. But Stalin's impact as a State Leader was in my opinion far more prominent. Stalin had inherited an essentially backward peasant country in 1929. He bequeathed to his successors a nuclear superpower. This was achieved at the cost of great human suffering. For this reason, he is one of the most controversial figures of the Twentieth century, to some-a Hero Figure, and to others a Tyrannical Villain. "Like Peter the Great, Stalin, caring nothing for suffering, had seized Russia by the neck and heaved her into the forefront of the world's nations"(N.C. Jackson). By Davina Collins ?? ?? ?? ?? 1 ...read more.