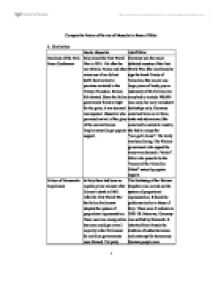 Compare the factors of the rise of Mussolini to those of Hitler.

Compare the factors of the rise of Mussolini to those of Hitler A. Similarities: Benito Mussolini Adolf Hitler Decisions of the Paris Peace Conference Italy joined the First World War in 1915. Yet after the war Britain, France and other victorious allies did not fulfill their territorial promises as stated in the Treaty of London. Italians felt cheated. Since the Italian government failed to fight for the gains, it was deemed incompetent. Mussolini who promised revival of the glory of the ancient Roman Empire naturally got popular support. Germany was the major defeated country of the First World War. She was forced to sign the harsh Treaty of Versailles. She was to lose large pieces of lands, pay an indemnity of �6.6 billion; her army had to include 100,000 men only; her navy included 6 battleships only. Germany could not have an air force, tanks and submarines. She could not be united to Austria; she had to accept the "war-guilt clause". The treaty was humiliating. The Weimar government who signed the treaty was deemed a "traitor". Hitler who posed to be the "enemy of the Versailles Diktat" naturally popular support. ...read more.

Hitler had won two medals of Iron Cross for his bravery in the First World War. General Ludendroff had been his supporter. Indeed, the Nazi Party enlisted a lot of ex-soldiers. In 1933 Hitler became Chancellor partly owing to the nomination of General Schleicher. Peasant Support Mussolini showed apathy to the Italian peasants. In elections Hitler tried best to appeal for the peasants' support. He promised to protect their hereditary tenures and reject imported foreign grains. The German peasants supported him enthusiastically. Great Depression Mussolini had come to power before the Great Depression. Hitler's rise to power was largely due to the Great Depression. International Circumstances Mussolini had come to power in 1922. At that time, collective security had not collapsed yet. In the late 1920s the U.S. had been crippled by the Great Depression. The Soviet Union was busy with internal reforms. Both Britain and France suffered from economic hardship. The League of Nations was unable to stop the aggression of Mussolini. All these encouraged the revival of German ultra-nationalism. Hitler found it easy to spread his Nazi ideas. Becoming Dictator Mussolini was never a complete dictator. Above him there was the king. Even the Pope could check his behaviour. In 1934 Hindenburg died. Hitler concentrated all power into his own hands. He became a complete dictator. 1 ...read more.