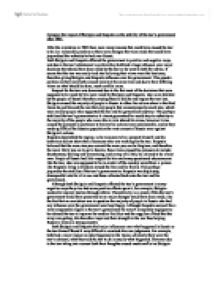 Compare the impact of Stolypin and Rasputin on the stability of the tsar(TM)s government after 1905.

Compare the impact of Stolypin and Rasputin on the stability of the tsar's government after 1905. After the revolution in 1905 there were many reasons that could have caused the tsar to be in a vulnerable position as there were changes that were made that could have jeopardised the authority he had over Russia. Both Stolypin and Rasputin effected the government in positive and negative ways, and due to the tsar's disinterest in politics they both had a huge influence over major decisions that should have been made by the tsar as he went to both for advice. It seems that the tsar was easily lead into believing their views were the best ones, therefore giving Stolypin and Rasputin influence over his government. This posed a problem as they were both around mainly at the same time and due to their differing views on what should be done, much conflict arose. Respect for the tsar was demeaned due to the fact most of the decisions that were supposed to be made by him were made by Stolypin and Rasputin, who were disliked by the people of Russia therefore causing them to dislike and respect the tsar less. ...read more.

Although Rasputin seemed like a very irresponsible figure in the tsar's government he wasn't completely negligent as he advised the tsar to improve the medical facilities and the supplies of food that the army was getting, this therefore improved their strength in the war thus helping Russia to remain a strong country. Both Stolypin and Rasputin had major influences over what happened in Russia as the tsar himself found it very difficult to conclude his own judgments. For example, both had a major impact on what happened in the Duma, ultimately they were the tsar's advisors, what they told the tsar to do is usually what happened. However due to the tsar taking into account both their thoughts caused much conflict as Stolypin and Rasputin had differing views on how Russia should be run. A prime example of this is when Stolypin got Rasputin banished from Russia. Even though the tsar was in need of Rasputin, due to his son having haemophilia, at Stolypin's word he was no longer allowed to be present. Although from this it seems it was Stolypin that had a greater influence over the tsar and his authority, an example of Rasputin having a tremendous amount of power was when he ...read more.

This would have stabilised the government, as the people of Russia would have been seeing change however it would have not been anything revolutionary. In theory this was a good idea, however Stolypin stated himself that for any effect to be shown it would have taken twenty years, and due to many factors, like the war and Stolypin's assassination, the effects were never seen. In conclusion both Stolypin and Rasputin affected the stability of the tsar's government and good and bad ways, however, Stolypin seemed to cause the government to stay how the tsar would have ideally wanted it to be, he strove for reform and not revolution, he wanted to protect tsarism and went to many lengths to make sure it was stable. Both Stolypin and Rasputin had control over the Duma, however, unlike Stolypin, who tried to change it in favour of the tsar, Rasputin went to much effort to change it in the favour of himself. He also showed up the tsar with his irresponsible behaviour. Overall, Stolypin seemed to be the person that tried to stabilise the government and make it the best it could have been under the circumstances, for example the backwardness of Russia, whereas Rasputin although perhaps meaning well some of the time, tended to hinder rather than help the stability of the tsar's government. ...read more.