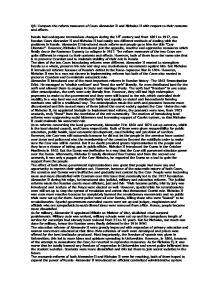 Compare the reform measures of Czars Alexander II and Nicholas II with respect to their contents and effects.

Q6: Compare the reform measures of Czars Alexander II and Nicholas II with respect to their contents and effects. Russia had undergone tremendous changes during the 19th century and from 1861 to 1917, two Russian Czars Alexander II and Nicholas II had totally two different methods of dealing with the problems in Russia. Alexander II introduced much reform and people gave him the title "Czar Liberator". However, Nicholas II introduced just the opposite, reactive and oppressive measures which finally drove the Romanov Dynasty to collapse in 1917. The reform measures of the two Czars are quite different in respect to their contents and effects. However, both of them have the same aim that is to preserve Czardom and to maintain stability of their rule in Russia. The aims of the two Czars introducing reforms were different. Alexander II wanted to strengthen Russia as a whole, preserve his rule and stop any revolutionary movements against him. But Nicholas II introduced reforms because of Russia's defeat in the Russo-Japanese War in 1904. However, Nicholas II was in a way not sincere in implementing reforms but both of the Czars also wanted to preserve Czardom and to maintain autocratic rule. ...read more.

But the Duma was ineffective in a way that the Czar still possessed absolute power over the Duma. Afterwards, Nicholas II totally dismissed four Dumas and from the second one onwards, it was only a puppet of the Czar Nicholas, he regarded the Duma as a tool to gain the support from the people. The effect of both these government representations was great that people had more say and opportunity to express their opinions out. However, because of the autocratic nature of both Czars, the zemstva and Dumas were ineffective and gradually lost control by the Czar. People were becoming more and more dissatisfied with Czardom over this issue that eventually led to the 1917 Revolution. Alexander II during his reign, he introduced also judicial, military and education reforms. The judicial reforms made the Russian courts more efficient, just and fair. Trials became public, trial by jury was introduced and Justices of the Peace were elected as well. However, special trials for revolutionaries were still set up to stop the spread of revolution and unrest that threatened Czarist rule. Nicholas II was even more reactive because he completely banned the revolutionary movements and no public trials were set up for them. ...read more.

Apart from Emancipation, reforms on military, economic, education, judicial and local government, Alexander II has also introduced Russification and industrialization in order to strengthen Russian as a whole. He has also released the tight censorship. Even the aim of both Czars was the same, they wanted to preserve their autocratic rule and prevent any revolutionary movements, but why did the Romanov Dynasty collapse under the reign of Nicholas II but not Alexander II? Although both of the Czars tried to carry out reforms in order the prevent any revolutions, Alexander II implemented sincere reforms in order to gain the support from below, however, Nicholas II carried out repressive measures which brought him negative effects and finally led to Revolution in 1905 and collapse of Romanov Dynasty. Hence, in some senses that, Alexander II was more successful with his reforms than Nicholas II. As we can see, the nature of the reform measures of both Czars was autocratic in nature that hoped to pacify the people in order to continue Czardom. However, in my opinion, the good sounds Alexander II laid down till 1881 was weakened by Nicholas II and he missed the opportunity to save Czardom because Russian reforms were resorted to repressive measures again in 1905. ...read more.