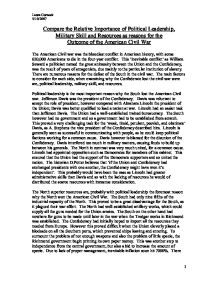 Compare the Relative Importance of Political Leadership, Military Skill and Resources as reasons for the Outcome of the American Civil War.

Compare the Relative Importance of Political Leadership, Military Skill and Resources as reasons for the Outcome of the American Civil War The American Civil war was the bloodiest conflict in American history, with some 620,000 Americans to die in the four-year conflict. This 'inevitable conflict' as William Seward a politician named the great animosity between the Union and the Confederacy, was the result of years of antagonism, due mainly to the particular institution of slavery. There are numerous reasons for the defeat of the South in the civil war. The main factors to consider for each side, when examining why the Confederate lost the civil war were are, political leadership, military skill, and resources. Political leadership is the most important reason why the South lost the American Civil war. Jefferson Davis was the president of the Confederacy. Davis was reluctant to accept the role of president, however compared with Abraham Lincoln the president of the Union; Davis was better qualified to lead a nation at war. Lincoln had an easier task than Jefferson Davis. ...read more.

However this proved difficult when the Union cleverly placed a blockade on all the Southern ports, which prevented ships leaving and entering. To surmount the problem of not enough weapons and also the problem of little specie, the Richmond government begin printing its own paper money. This was another step to independence from the central government, but also a bid to increase the amount of specie. Due to lack of proper management, inevitable inflation soon hit 7000%. There was no regulation on the printing of money and so there was eventually too much in the Confederacy. This caused a great problem for the Southern people and greatly lowered morale. The North however faced no such problem, as they had a very well organised finance department within the government. By 1862 the Union had developed efficient management of the Union economy and the flow of military supply. With well over half of the nation's railways and combined with the sufficient resources to optimise the use it appeared in North victory was inevitable. The South did have a third of the nation's railway mileage, but it didn't have the resources let alone the workers to optimise this potential transport. ...read more.

The South having applied this style of warfare would have eroded the Northern will to fight. The main reason why the Confederacy neglected the West was the poor organisation of the military departments. The West was an extensive terrain, which favoured the North who had greater resources and organisation. If however the Confederacy had attempted to defend the West then this would of left the most important industrial state Virginia open to attack. The fact that the South decided to concentrate its efforts on the most important states and not the west probably helped the South to survive against the North for the four years it did. Overall the Southern defeat by the North was due mainly to the lack of resources. The South with the challenge of starting a government from scratch and sustaining a war against a well established government (Union) did surprisingly well to survive for four years, against the Union. Davis the leader of the Confederacy did sustain the Confederate cause for four years even if the aim of ultimate independence was not achieved the eventual reconstruction period did greatly consider states' rights and the people. Laura Curnock 5/10/2007 I ...read more.