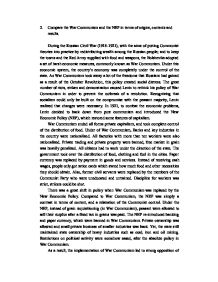 Compare the War Communism and the NEP in terms of origins, contents and results.

2. Compare the War Communism and the NEP in terms of origins, contents and results. During the Russian Civil War (1918-1921), with the aims of putting Communist theories into practice by redistributing wealth among the Russian people; and to keep the towns and the Red Army supplied with food and weapons, the Bolsheviks adopted a set of harsh economic measures, commonly known as War Communism. Under this economic system, the country's economy was completely under the control of the state. As War Communism took away a lot of the freedoms that Russians had gained as a result of the October Revolution, this policy created social distress. ...read more.

All citizens had to work under the direction of the state. The government took over the distribution of food, clothing and fuel in the cities. Paper currency was replaced by payment in goods and services. Instead of receiving cash wages, people only got ration cards which stated how much food and other necessities they should obtain. Also, former civil servants were replaced by the members of the Communist Party who were uneducated and untrained. Discipline for workers was strict, strikers could be shot. There was a great shift in policy when War Communism was replaced by the New Economic Policy. Compared to War Communism, the NEP was simply a contrast in terms of content, and a relaxation of the Communist control. ...read more.

Agricultural production dropped sharply, food shortage thus became acute. Great famine broke out in 1921, 7 million people died of starvation. Industrial production also declined rapidly. Corruption of the Bolsheviks members created an inefficient bureaucracy. Nevertheless, the New Economic Policy succeeded in creating an economic recovery after the devastating effects of the First World War, the Russian Revolution and the Russian civil war. The agricultural and industrial production had been restored to the 1913 (pre-WWI) level. The government regained people's confidence. In conclusion, both War Communism and the New Economic Policy were implemented to resolve economic problems. In terms of content, War Communism was truly a set of policies under pure communism, while the NEP was against the principle of communism. However, eventually, War Communism led to an economic collapse, while the New Economic Policy resulted in an economic recovery. ...read more.