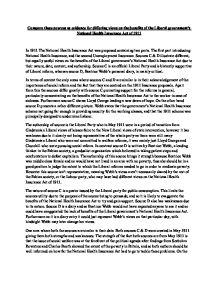 The authorship of this source brings it strength because Beatrice Webb was middle class female and so would have not lived in an area with no poverty, thus she should be in a good position to judge the extent to which the Liberal reforms needed to go in order to eradicate poverty. However this source isn't representative, meaning Webb's views aren't necessarily shared by the rest of the Fabian society, or the Labour party, who may have had different views on the National Health Insurance Act of 1911. The nature of source C is a poster issued by the Liberal party for public consumption. This limits the sources utility due to the purpose of the source being to persuade, and so it is likely to exaggerate the benefits of the National Health Insurance Act to try and gain support. Source D also has weaknesses due to its nature. ...read more.

passed, and so both sources discuss perceived consequences that the authors think that the Act will have, rather than the actual benefits that might come once the Act came into place. Overall sources C and D both provide a fair amount of evidence for differing views of the benefits of the Liberal government's National Health Insurance Act of 1911 due to their authors both being at the forefront of social reform as well as the dates that the sources were created being a time at which the issue of social reform was high up the political agenda. However there are many weaknesses in both sources mainly due to the fact that neither of them are completely representative and so not many views are presented on the benefits of the Liberal government's National Health Insurance Act of 1911. Moreover they were both created before the National Health Insurance Act was passed and so neither have hindsight on how many benefits the act actually had. ...read more.