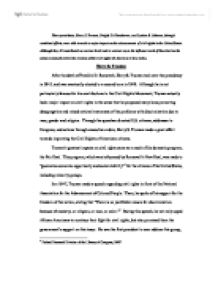 Three presidents, Harry S. Truman, Dwight D. Eisenhower, and Lyndon B. Johnson, through combined efforts, were able to make a major impact on the advancement of civil rights in the United States. Although they all contributed on various levels and in various ways, the influence each of them had on the nation eventually led to the creation of the civil rights all American's have today. Harry S. Truman After the death of Franklin D. Roosevelt, Harry S. Truman took over the presidency in 1945, and was eventually elected to a second term in 1948. Although he is not particularly famous for his contributions to the Civil Rights Movement, Truman actually had a major impact on civil rights in the sense that he proposed many laws promoting desegregation and raised national awareness of the problems with discrimination due to race, gender and religion. Through his speeches directed U.S. citizens, addresses to Congress, and actions through executive orders, Harry S. Truman made a great effort towards improving the Civil Rights of American citizens. Truman's greatest impacts on civil rights came as a result of his domestic program, the Fair Deal. This program, which was influenced by Roosevelt's New Deal, was made to "guarantee economic opportunity and social stability"1 for the citizens of the United States, including minority groups. In a 1947, Truman made a speech regarding civil rights in front of the National Association for the Advancement of Colored People. There, he spoke of his support for the freedom of the nation, stating that "There is no justifiable reason for discrimination because of ancestry, or religion, or race, or color."2 During this speech, he not only urged African Americans to continue their fight for civil rights, but also promised them the government's support on this issue. He was the first president to ever address this group, showing that he would not only support their cause, but also not let the many pro-segregation groups and citizens affect his actions towards ending discrimination. ...read more.

When President Johnson went into office, he wasted no time before attempting to pass a bill. He urged for the quick passing of the Civil Rights Act of 1964, which Kennedy had introduced. The bill passed and made segregation in all public places illegal. This bill symbolized a major step for civil rights of the time, and it led to the passing of even more civil rights acts. In his famous speech of 1964, The American Promise, Lyndon Johnson bluntly described how blacks were being denied the right to vote. He claimed that "No law that we now have on the books-and I have helped to put three of them there--can ensure the right to vote when local officials are determined to deny it."7 He felt that the only way to be sure that blacks were able to register and vote was to make a new bill that would truly enforce the constitutional voting right for Negroes. He described how previous civil rights bills had taken eight months to get back to the president, and after they did ,all of the reasons they would have been beneficial had been eliminated. Foreseeing that this would likely happen again, he told congress they must act quickly. In this inspirational speech, Johnson had the courage to state the problems with voting rights without any fluff. By taking this risk, he ended up being successful, and The Voting Rights Act of 1965 was passed shortly after. A year later, almost one million8 African American's had successfully registered to vote. In 1965, Johnson also began to refer to his reform party as the Great Society. This party was dedicated to eliminating "poverty and racial injustice"9 within the nation, and it included many actions that benefited civil rights as well. Through this program, Johnson god rid of the "discriminatory quotas set in 1924"10 for immigration. He also helped to raise the income for African American families from "54 percent to 60 percent of white-family income"11 between 1965 and 1968. ...read more.