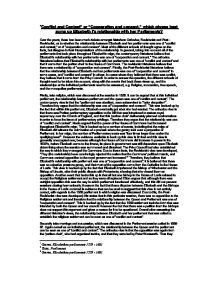 This view is backed up by the fact that Cecil was calling for the Queen to marry and to name a successor in order to secure her throne, and leave the country in a secure position. Overall after assessing the different historian's views, the relationship between Elizabeth and her parliament that was called due to succession issues, can be seen as one of "conflict and contest". It is however difficult to determine whether the opposition came from the House of Lords, or the Privy Council. Thirdly take the parliament of 1586 -1587 where Elizabeth's councillors pushed her to agree to the execution of Mary Queen of Scots. In general it can be argued that the relationship was one of "conflict and contest". The contemporary view was that relationship was one of "cooperation and consent." However it can be argued against, because the council went against Elizabeth's wishes and had Mary Queen of Scots executed, before she arranged it. However it was cast aside when Neale developed the view that the debates emphasised the emerging threat that came from Presbyterianism, wanting to demolish the Queen's position as Head of the Church, church courts, and episcopacy, therefore believing that the relationship was one of "conflict and contest." This view is backed up by the fact that Elizabeth refused to commit until Walsingham revealed the Stafford Plot, to scare her into signing Mary's death warrant. This shows that rather than cooperate with the Queen they had to force her into signing. ...read more.

However there are events that do not support this view, such as the MP's believed that she was trying to make herself independent of Parliament and therefore was overstepping the bounds of authority, this shows that there was "conflict and contest" rather than "cooperation and consent" which Elton argues. Overall after assessing the different historian's views, the relationship between Elizabeth and her parliament that was called to discuss subsidies can be seen as either a relationship of "conflict and contest", or a relationship of "cooperation and consent". Elizabethan Parliament was a working institution that engaged in the manufacture of legislation by agreement and in sorting out matters that may cause disagreement. It was dominated by the Queen. Overall it can be argued either way, if the view of "conflict and contest" is taken, this applies to the relationship in a number of Parliaments such as, the sessions that discussed the religious settlement, succession, monopolies and freedom of speech. However if the view of "cooperation and consent is taken", this can be applied to the parliaments that concerned money and taxation, and in some cases to the religious settlement, because the Queen and council got their desired settlement. However it is better to argue that the individual parliaments had an individual relationship with the Queen due to the differing outcomes, amount of opposition and the outcomes of each parliament. This is also a good argument because of the amount of conflict, contest, cooperation and consent that occurred differed in each parliament. 1 Graves. Elizabethen parliaments 1559 - 1601 2 Elton. Parliament 3 Graves. Elizabethen parliaments 1559 - 1601 ?? ?? ?? ?? ...read more.