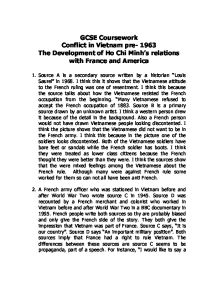 Conflict In Vietnam Pre- 1963 - the Development of Ho Chi Minh&amp;#146;s Relations With France and America

GCSE Coursework Conflict in Vietnam pre- 1963 The Development of Ho Chi Minh's relations with France and America 1. Source A is a secondary source written by a historian "Louis Saurel" in 1968. I think this it shows that the Vietnamese attitude to the French ruling was one of resentment. I think this because the source talks about how the Vietnamese resisted the French occupation from the beginning. "Many Vietnamese refused to accept the French occupation of 1883. Source B is a primary source drawn by an unknown artist. I think a western person drew it because of the detail in the background. Also a French person would not have drawn Vietnamese people looking discontented. I think the picture shows that the Vietnamese did not want to be in the French army. I think this because in the picture one of the soldiers looks discontented. Both of the Vietnamese soldiers have bare feet or sandals while the French soldier has boots. I think they were treated as lower class citizens because the French thought they were better than they were. I think the sources show that the were mixed feelings among the Vietnamese about the French rule. Although many were against French rule some worked for them so can not all have been anti French. 2. A French army officer who was stationed in Vietnam before and after World War Two wrote source C in 1945. ...read more.

This was because the cold war was just starting and the Americans considered all communists as the enemy. Source K illustrates the switching of sides "I tried to discover what had happened to the war time policy of helping the Vietnamese...General: "Son you don't understand the big picture!"". The "big picture" was that the cold war was just starting and the Americans saw all communists as a threat to their way of life. There was a power vacuum at the end of the second world was and the two super powers the USA and the USSR both wanted to fill it. The Vietnamese did not realise that they were involved in the cold war this is shown in source L which is a letter by Ho Chi Minh to Lieutenant Fenn, "I feel only sorry that our American friends have to leave us so soon.". He still thought of the Americans as allies and did not realise that they saw them as a threat. The US National Security Council was worried about communist control of Asia because of resources, "South East Asia is the principal world source of natural rubber and tin, and a producer of petroleum and other strategically important commodities." The USA believed in the domino theory, which was if one country went communist, all the countries around it would follow. That was another reason why they saw Vietnam as a threat. The Americans had good relations with them when it suited them, but as soon as it did not they changed sides. ...read more.