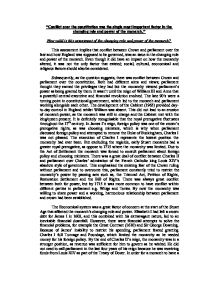 &quot;Conflict over the constitution was the single most important factor in the changing role and power of the monarch.&quot;

"Conflict over the constitution was the single most important factor in the changing role and power of the monarch." How valid is this assessment of the changing role and power of the monarch? This assessment implies that conflict between Crown and parliament over the law and how England was supposed to be governed, was an issue in the changing role and power of the monarch. Even though it did have an impact on how the monarchy altered, it was not the only factor that existed; social, cultural, economical and religious factors should also be considered. Subsequently, as the question suggests, there was conflict between Crown and parliament over the constitution. Both had different aims and views; parliament thought they earned the privileges they had but the monarchy viewed parliament's power as being granted by them. It wasn't until the reign of William III and Anne that a powerful central executive and financial revolution evolved. The late 90's were a turning point in constitutional government, which led to the monarch and parliament working alongside each other. The development of the Cabinet (1965) provided day-to-day control in England whilst William was absent. This did not lead to an erosion of monarch power, as the monarch was still in charge and the Cabinet met with the king/queen present. It is definitely recognisable that the royal prerogative fluctuates throughout the 17th century. ...read more.

In order for a monarch to have a sound financial system, co-operation with parliament is needed. Parliament viewed money as a bargaining tool in order to gain more power and influence from the monarch. This becomes apparent in the reign of William III who needed sufficient funding to continue fighting the war against the French. Parliament agreed to grant him excise for life, but increased his dependence on them by only voting him custom duties for 4 years. William agreed to give up his prerogative rights e.g. choosing ministers in exchange for money. It wasn't, however, until the war with France that major, successful changes took place, which headed towards a financial revolution. From 1693-4 the principle of borrowing money was regularly used, for example The Million Loan Act (1693), which led to the establishment of the Bank of England. The Economical system was the strongest it had ever been in the 17th century, as it was working cordially alongside parliament. What also had an impact on the monarch's power were social and cultural factors. England was a Protestant country so the majority of society was not fond of Catholics and much propaganda provoked a great fear of Popery. People accepted that the monarch was chosen by God and viewed the king/queen as saintly figures. This starts to be questioned in Charles I's reign, when the Long Parliament challenges him about his unacceptable behaviour. ...read more.

By the end of the late 1680's religion was less of a concern, especially as the Act of Settlement abolished any fears of a Catholic monarch. A Toleration Act was passed in 1689, which shows how the level of religious issues had diminished. Parliament tried to stop James II from inheriting the throne, due to his religious beliefs, but by 1715 religion no longer had a great impact on the role and power of the monarch. Even though parliament gained more influence and the prerogative rights of the Crown became limited, the status of the crown only got stronger. It went from being weak and unstable, to being abolished, and then gradually improved into a strong position, where financial and political factors had been settled. In reference to the question, I agree that conflict over the constitution had a considerable impact on the power of the Crown, however it was economical factors that caused much alteration in the changing role and power of the monarch. If Charles I's Personal Rule is considered, the only reason that came to an end was the need for finance to deal with the Scottish dispute over their prayer book. Another example is how William III exchanged parts of his prerogative in order to receive money to fight the French. Parliament used finance to slowly gain a powerful voice, as they knew the monarch could not rule effectively without their economical assistance, which is why having a strong financial system was the greatest issue that changed the power of the monarchy. ...read more.