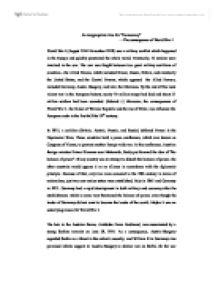 An inappropriate time for "Democracy" ---The consequence of World War I World War I (August 1914-November 1918) was a military conflict which happened in the Europe and quickly penetrated the whole world. Eventually, 32 nations were involved in the war. The war was fought between two great military coalitions of countries-the Allied Powers, which included France, Russia, Britain, and eventually the United States; and the Central Powers, which opposed the Allied Powers, included Germany, Austro-Hungary, and later, the Ottomans. By the end of this most violent war in the European history, nearly 10 million troops had died and about 21 million soldiers had been wounded. (Edward J.) Moreover, the consequences of World War I - the failure of Weimar Republic and the rise of Hitler, also influence the European order in the first half the 20th century. In 1815, a coalition (Britain, Austria, Prussia, and Russia) defeated France in the Napoleonic Wars. These countries held a peace conference, which was known as Congress of Vienna, to prevent another Europe-wide war. At the conference, Austrian foreign minister Prince Klemens won Metternich, firstly put forward the idea of "the balance of power". If any country was to attempt to disturb the balance of power, the other countries would oppose it as an alliance in accordance with the diplomatic principle. ...read more.

Moreover, hundreds of thousands soldiers returned from the military fronts, jobless, hungry, which in some way promoted the revolution happened in Germany at the beginning of 1918. "Long live the German republic!", this "accidental" proclamation directly made Ebert set his mind to establish a moderate democratic republic, rather than a republic of workers' and soldiers' councils in imitation of the soviet republic. And this "dream" came true in February 1919. "The new German Republic would eventually have a constitution that made it on paper one of the most liberal democracies in history. Its ideals included: equality for all, that political power would be only in the hands of the people, political minority representation in the new Reichstag, a cabinet and chancellor elected by majority vote in the Reichstag, and a president elected by the people."(Phillips, G, 1996, 2) However, Germany was also suffering from political and social chaos at that time. Besides that, under the terms of the Treaty of Versailles signed between the victorious Allies and Weimar Republic, Germany alone had responsibility for causing the war and had to pay huge reparations for all the damage. As a consequence, the first problem the republic faced was about the economy - inflation, and at last it turned out to be the main reason of destroying German mark. ...read more.

The opportunity came at last on October 29, 1929, when the stock market crashed on Wall Street. It quickly became a worldwide depression. The crash had an immediate effect in Germany as many Americans stopped the investments and withdrew the loan to Germany, which directly influenced the stock market in Germany. Eventually, the unemployment rate and inflation rate both rose up, the economy collapsed again. After that, the problem became more serious, the Democratic Party, representing labor, and the People's Party, representing business, were unable to agree the government's contribution, soon Democratic Republic came to the end. During that time, Hitler quickly increased his reputation and popularity by promising to give the people what they wanted. On January 30, 1933, Hitler finally became the leader of Germany. After that, Hitler rebuilt Germany in only three years, making it become the most powerful country all over the world. So the revenge would start, the same as what he said in his biography. There is no doubt that Hitler is a clever person, he clearly knows what is the masses really want. "Democracy" is a good idea; everyone has a strong desire of equality. However, it was not the right time for Germany to build a democratic country at that time. Obviously, revolutions always happen along with the collapse of economy, because people only care about the life rather than the democracy. So "democracy" seemed to happen at an inappropriate moment. ...read more.