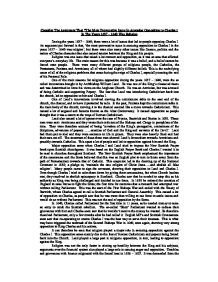 Consider The Argument That "The Most Provocative Issue In Arousing Opposition to Charles 1 In The Years 1637 - 1640 Was Religion During the years 1637 - 1640, there were a lot of issues that led to people opposing Charles I. An argument put forward is that, 'the most provocative issue in arousing opposition to Charles I in the years 1637 - 1640 was religion', but there were also many other issues like finance, politics and the nature of Charles character that also caused tension between the King and his people. Religion was one issue that raised a lot concern and opposition, as it was an area that affected everyone's everyday life. The main reason for this was because it was a belief, and a belief cannot be forced onto people. There were many different groups of religious people, the Catholics, the Protestants, Puritans and Arminians; all of whom had slightly different beliefs. This is the underlying cause of all of the religious problems that arose during the reign of Charles I, especially nearing the end of his Personal Rule. ...read more.

Major opposition arose when Charles I and Laud tried to impose the New Scottish Prayer book upon Scottish churchgoers. It was based on the English Prayer Book and Charles I wanted it to be read in churches throughout Scotland. The New Scottish Prayer Book emphasised the importance of the ceremonies and the Scots believed that this was an English plot to turn to Scots away from the path of Protestantism towards that of Catholic. This suspicion led to the drawing up of the National Covenant in 1638; a pledge to, 'maintain the true religion of Christ Jesus.....and abolish all false religion'. Many people came to sign the covenant, showing their opposition to Laud and Charles I. Even though Charles I tried to calm them down by giving them concessions, but when Church leaders met, they resolved to abolish episcopacy in Scotland. Charles saw that he needed to stop this as his authority as King was being challenged and decided to use force. In 1638 he ordered the counties of England to raise forces to fight the Scots; the first time for centuries that a monarch had attempted war without calling Parliament. ...read more.

There were questions over whether this was really legal, but this was only the beginning of the King's legally dubious methods of collecting money. The main opposition was caused by the collection of Ship Money. Theoretically, coastal countries were required to provide ships for royal service in times of emergency, but in practice most people were charged and money was sent instead of ships. In the years 1634 - 1640, JP's were made to collect ship money even though England was not at war. Charles I said the money was needed to protect the country against pirates. In 1635, ship money was collected from everyone. The tax raised many issues. It had become a permanent tax, not one that was collected when it was needed and everyone was paying it. Questions were also raised about where the taxes were spent, as it seemed as though it was being used to convey Spanish ships, not protecting the country against pirates. This caused a lot of suspicion and opposition towards the King as people didn't like paying taxes, but they also were not sure where the money was being spent and didn't like that it had become a permanent tax. ...read more.